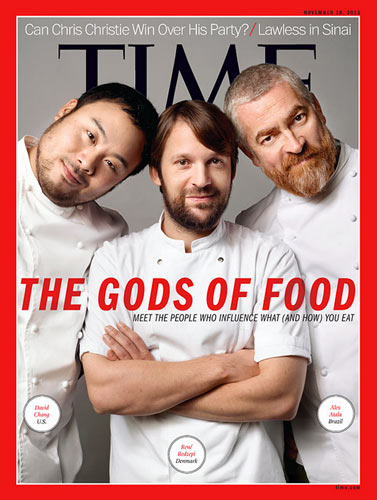 Why? Because in the cover story that identifies chefs, food writers, activists and policymakers who shape the gastronomic landscape, only four are of the female gender, and none of them are chefs.

Okay, so that might not have been on purpose, and we do not intend to mingle in that discussion. Instead, we’re taking a closer look at the signature dishes of the three chefs that feature on the cover. From left to right: David Chang (Momofuku, NY), Rene Redzepi (Noma, CPH) and Alex Atala (D.O.M., São Paulo).

His dad imagined him as a Golf Champion, but David Chang’s mind was set on other things. While in Japan teaching English he found a new passion by visiting the local ramen bar. It’s where he perfected the art of the ramen noodle. Chang opened his first noodle bar Momofuku in NY, but now the Korean-American entrepreneur owns a whole range of noodle bars and restaurants around the world. The Momofuku pork buns is his signature dish (find the recipe here). Read more about David Chang’s road to success here. 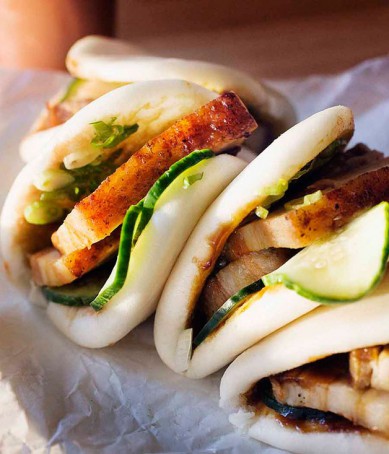 For us Europeans Rene Redzepi is a familiar name. The Copenhagen based chef is well known for his eclectic cuisine at his two Michelin-star studded restaurant Noma. His innovative cooking is founded by his experiences at Pierre André and a season at El Bullí. Noma was voted Best Restaurant in the world three years in a row. Rene Redzepi has several signature dishes to his name, so we chose one that appealed to us most:

Here’s a nice article on Redezepi’s early years at Noma.

Alex Atala can magically recreate the Amazon on a plate. He started his culinary career at the École Hôtelière de Namur in Belgium after which he worked at several restaurants in France and Italy to return to his native Brazil in 1994. The chef is dedicated to the enrichment of national ingredients. He scours the Amazon for indigenous produce to fuse with French and Italian culinary techniques, and at the same time tries to find sustainable solutions in the sourcing, beneficiary to the Amazon and its inhabitants: ‘I believe that cuisine is the most important link between nature and culture’. Find more insights on Alex Atala’s native Brazilian cooking here.
One of Atala’s signature dishes is Pirarucu with tucupi; a type of white fish with the juice of manioc (the equivalent of soy sauce for the Asian). Watch this video on what Atala has to say about tucupi. 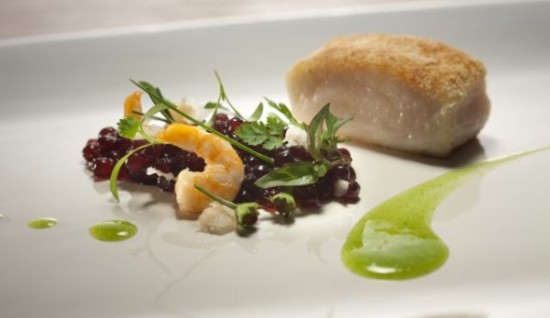