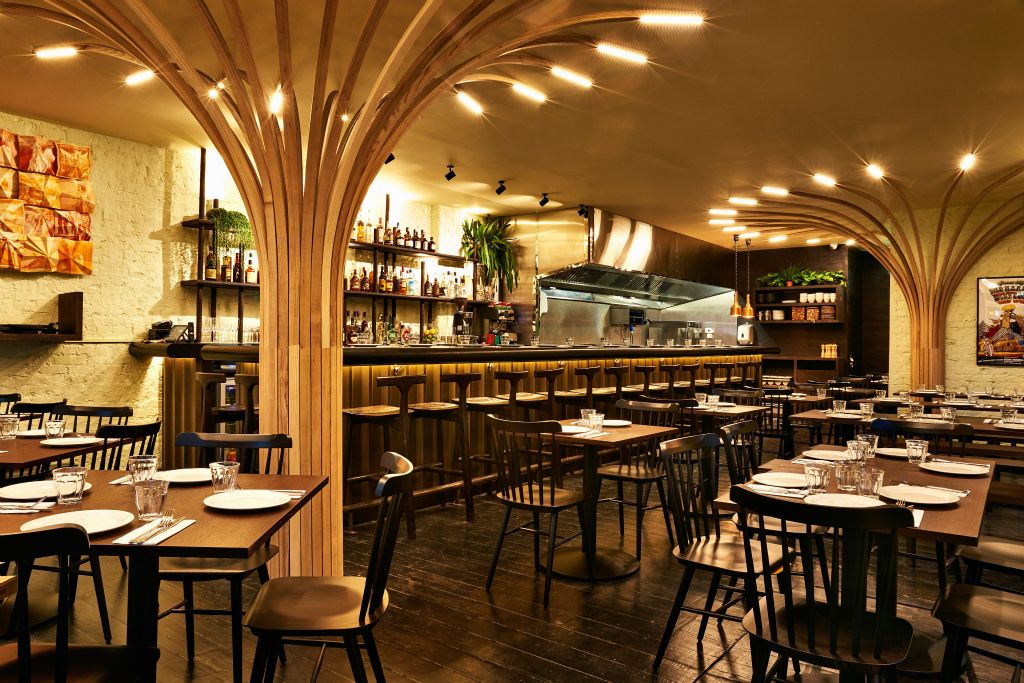 When I think of Jamaica, I visualize some famous tv commercials from Malibu rum. They’re not meant to be taken very seriously, but it reflects the laid back mentality of the people. And of course, when I think of Jamaica it’s almost impossible not to think about Bob Marley. His songs always get me in the Summer vibe. Jamaican food however, that was a first.

During my trip to London, on a dreary, rainy evening, my travel companion and I headed towards Dalston. It’s one of those upcoming neighborhoods, where new restaurants and bars pop up. Rudie’s is a new kid on the Dalston-block, where you can enjoy Jamaican delights. And this obviously includes rum. 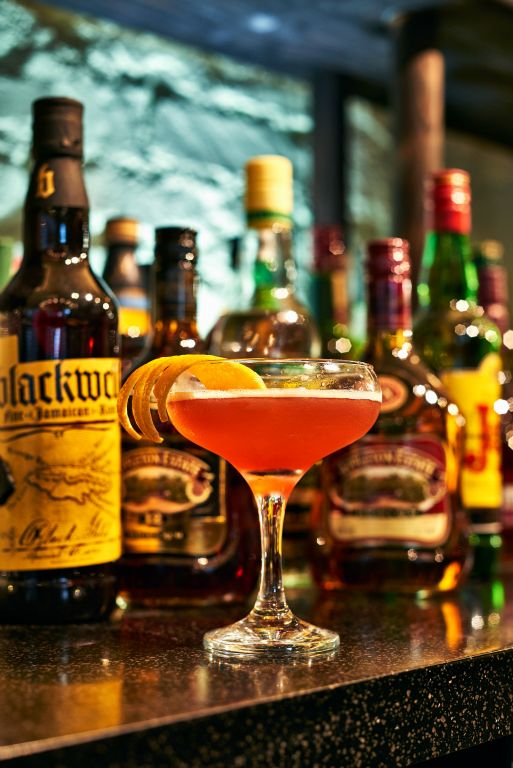 The restaurant itself has a contemporary ambiance. You won’t get distracted by all sorts of tropical references. Just wooden furniture, some plants and floor to ceiling fanning tree-like lamps. It’s the food that counts. With main focus on ‘jerk’ style cooking; the meat or fish gets rubbed or marinated with a spicy paste of pimentos (Scotch bonnet peppers/habaneros) and slow smoked or grilled over coal and pimento wood chips (from the tree on which the peppers grow). At Rudie’s they have their own traditional drum to smoke and grill. 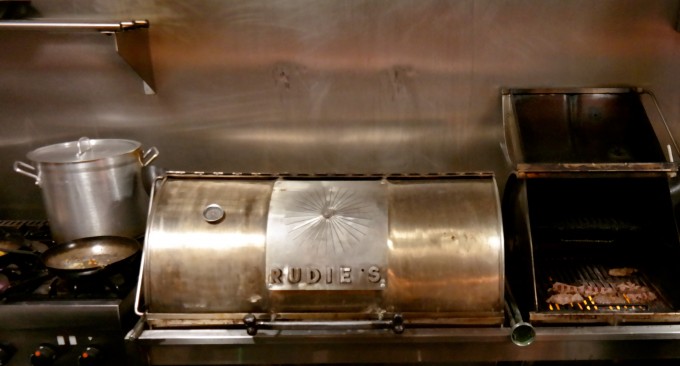 To fully experience my Jamaican meal I started with a signature rum cocktail. The Jamaican Nice ‘a typical blend of all things nice, which epitomises Jamaican beach life’. A fruity, boozy smoothie. Me like.
As a starter we tasted the Jerk calamari with lime and coriander dip and the patty with lobster. Both very tasty, but the latter won us over with a creamy and spicy filling. Perfectly balanced with the soft chunks of lobster. 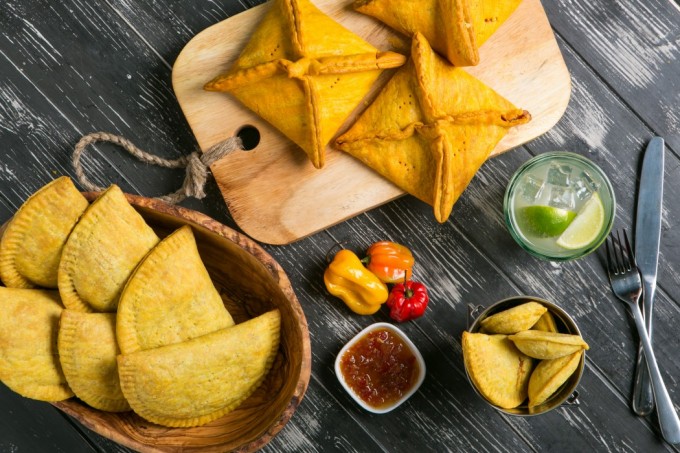 Next my friend had the Jerk chicken everybody was raving about in reviews, and we had to agree. Tender, moist chicken with a spicy grill flavour, making you wonder why you never ate your chicken like this before. It’s served with three sauces; a hot papaya sauce, a medium banana pepper sauce or the mild jerk ketchup. For some freshness my friend took the Avo, Mango, Cucumber salad on the side, though I ended up eating it (looove mangos!) 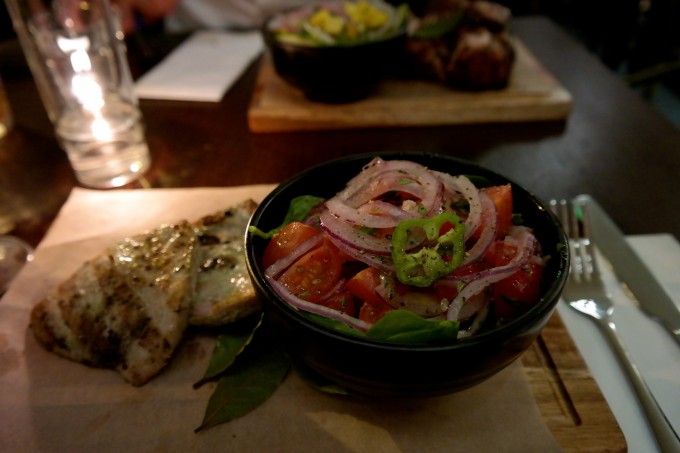 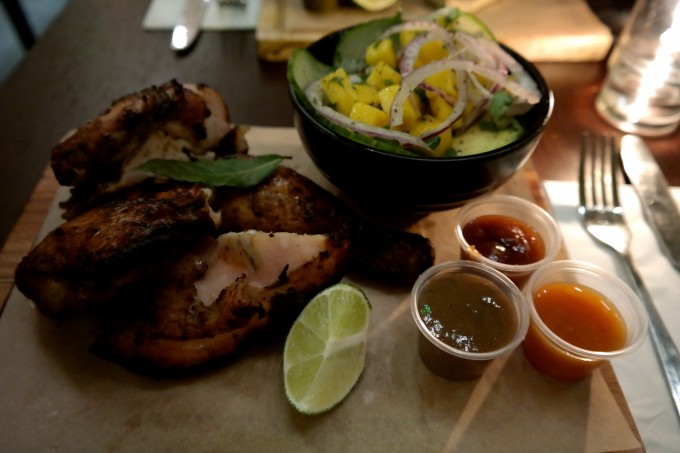 I was aiming for the lobster as a main, but unfortunately they were out of my favorite seafood. I had the swordfish steak instead. Perfectly prepared and far from the somewhat dry cooked swordfish I had served at other restaurants several times. Obviously only Sicilians and Jamaicans know how to prepare it correctly. This dish is served with a cherry tomatoes, avocado, red onion and spinach salad. And to be honest, it doesn’t need anything else. Just keep it simple, focus on the freshness of the ingredients and the island’s tropical flavours. Speaking of which…the cocktail wasn’t the only one involving rum…You know I always have this urge for desserts. My meal ain’t complete without it. Well, it’s also to see if a restaurant is able to serve a consistent quality throughout all courses, and with specific cuisines, the desserts will complete the story for the palate. So we ordered the Rum Cake with Rum caramel sauce and ice cream and the Banana Brulée. A tad heavy on the stomach, but oh my! you have to try this!

If anything makes me want to visit Jamaica, our dinner at Rudie’s definitely has. More of these delish lobster patty’s, Jerk grilled goodies, rum and reggae tunes, and we say: “Ya! Man!!!”

Published in ALL ARTICLES, Europe, Food and Hotspots