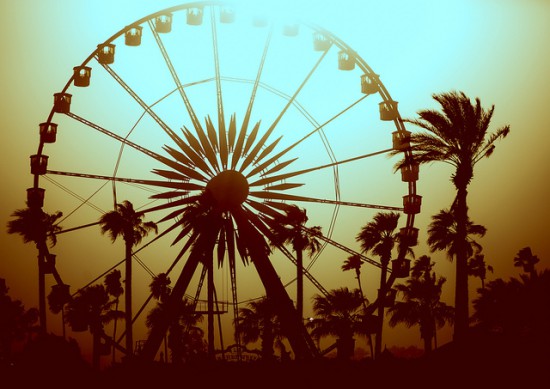 It’s the first biggie to kick off the festival season: Coachella. Even though we’d rather be there ourselves, we’re happy that youtube facilitates the live broadcast of the festival so we can still be a part of it.

Coachella was founded in 1999, is held at the Empire Polo Club in Indio, California and showcases a variety of emerging artists, reunited groups (for this edition Outkast reunites) and popular, established artists representing many genres of music including rock, indie, hip hop and electronic dance music.

Besides musical performances, Coachella also hosts different forms of art, such as installations and sculptures.

Every big name in the industry has shown its face at the festival, wether performing or visiting. It also attracts a large audience of fashionistas and therefore a perfect playground for streetstyle photographers.

But let’s get back to the essence: the music. The 2014 edition features a.o.: a reunited Outkast, Muse, Lorde, Disclosure, Flume, Rudimental, Calvin Harris, MGMT, Foster the People and Pharell Williams.

Check the full schedule here. (take the 9 hrs earlier time difference into account). The broadcasts are divided over three channels. Go to the upper left in the screen on the playlist icon to switch channels:

See more on www.coachella.com and our previous articles about Coachella here and here.