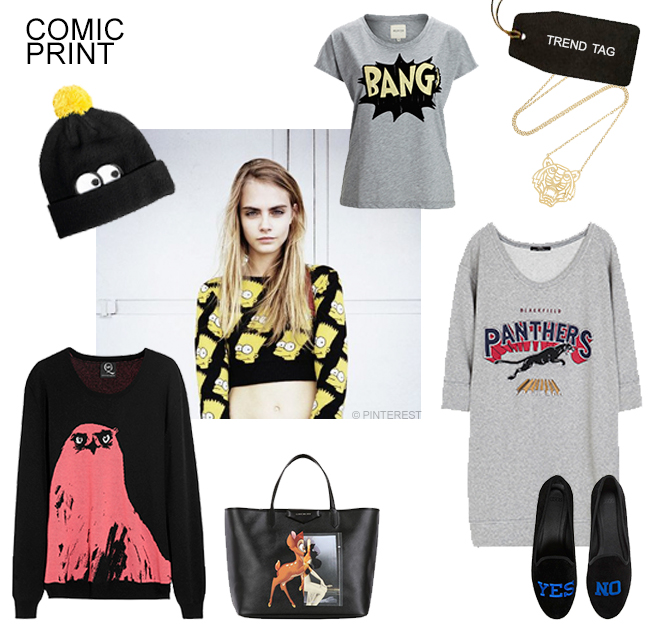 The Ka-Pow sweater by 3.1 Phillip Lim was a true showstopper last year. This designer item became a big hit and even a trend because of it’s knock-offs from Primark and H&M. After that, the cheerful Kenzo Tiger Sweater became THE musthave and was seen on every fashion blog. Me, as a true fashion victim, loved these items, but this season I don’t feel like wearing them anymore. They’ve had their time to shine, let’s move on to the next designer it-item!

Kenzo and 3.1. Phillip Lim have managed to set a trend: the sweater trend. From plain grey ones to heavy colored all over the place sweats. But if you want to follow the footsteps of true fashionista’s like Cara Delevingne or Carlotta Oddi, you have to go Cartoon! The dorkier, the better. Mickey Mouse and Bambi will be your new best buds: nostalgia is the way to go!

Since I work for SWYF and I search the web for fashion finds almost every day, I’ve spotted this trend quite early. It all started with some Disney figures on t-shirts. At first I thought I ended up at the children’s department, but after having a closer look I saw these items were actually for women and were being sold at quite trendy shops. Later on I spotted these items at several fashion weeks and I have to say (thanks to Givenchy), Bambi and his friends started to grow on me. Disney figures are actually pretty Urbanista!

The Comic Trend is not really feminine, but if you wear these items the right way, cartoon prints can definitely create a cool outfit. Furthermore, this trend is quite comfy without looking sloppy. Go for a sweat dress combined with Nike Free Runs or, for the more feminine look, put a sweat on top of a skirt. There are all different ways to go with the comic print. The dorky cartoon is now a designer musthave!