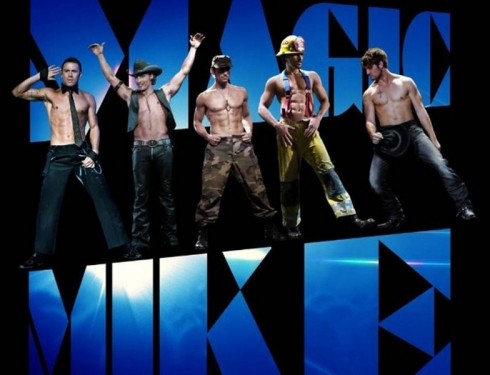 It is being launched in all the Dutch cinemas today, but Magic Mike from director Steven Soderbergh (Ocean’s eleven, twelve, thirteen) already broke the visitor’s records during during the Ladies Night preview.

We enjoyed the sight of Channing Tatum, Alex Pettyfer and Matthew McConaughey last friday at the press screening, and we can imagine why the movie is popular amongst the ladies (and some men). It’s a whole lot of sixpacks throughout the whole movie!

The story is loosely based on Channing Tatum’s past as a stripper. One can see the actor is experienced in doing a stripper-act, he definitely had the best moves. Let’s say that this is not a movie you should go see for the storyline, which is a bit shallow, but you will have quite a few laughs since ‘Magic’ Mike (Channing Tatum) doesn’t lack a sense of humor. Especially when it comes to seduce Adam aka The Kid’s (Alex Pettyfer) sister Brooke.

Another interesting character is club Xquisite’s stripper-turned-manager Dallas (McConaughey) who takes his crew to rehearse in a local gym to demonstrate the essence of a stripper act wearing nothing more than a boxer and a shrunken T-shirt. Dallas embodies the performer who -passed his stripper years- developed a nose for talent and new business opportunities. Even though they can be a bit shady.

Published in Lifestyle, News and Video