Is binge watching what you do in your spare time? Then brace yourself, because this is our selection of  the new Netflix and HBO series you should not miss out!

Fuller House
A big trip down nostalgia lane for the nineties kids. The house is filled again with almost the entire cast returning, and this spin-off is highly anticipated since the news came out last year. DJ, Stephanie and Kimmy all over again, but now grown up and ehm…matured? Set to premiere on February 26. Welcome home girls. The teaser doesn’t reveal much though:

Stranger Things
‘Wynona Forever’, it said on Johnny Depp’s arm. It was the first celebrity couple that could captured our interest at the time. Too bad it didn’t last, but we imagine it must be difficult to maintain a relationship between two talented young actors. Even though we haven’t heard as much about Wynona as Depp during the years -except for Wynnie’s kleptomanic escapades and her pretty face starring in Marc Jacobs ads (and again for an upcoming campaign)- she is a talented actress. The now 44-year old Ryder will feature in the supernatural thriller series ‘Stranger Things. Again a haze of mystery about the content, except that it’s set in 1983 Indiana after the disappearance of a young boy. No release date yet.

The Get Down
You say Hip-Hop? You say Baz Luhrmann (Romeo + Juliet, Moulin Rouge, The Great Gatsby, the Chanel Nº5 ad featuring Gisèle Bündchen and Michiel Huijsman)? Sounds like a killer combination in terms of a visual treat. Add Jaden Smith to the cast and we can’t wait to see this music-driven drama, set in the 1970’s in New York City’s South Bronx. The teaser was already released a year ago, so the tension is building. When it will be aired, remains to be announced:

Love
It’s a comedy, it’s created by Judd Apatow (GIRLS) and it’s about L.O.V.E. Though it’s the description “an unflinching, hilarious and excruciatingly honest take on modern relationships” that got us anxiously waiting. ‘Love’ debuts with 10 half-hour episodes Set to release on February 19. Just a few days after Valentine’s Day. Probably to soothe all heartbroken souls with some humor…

Marseille
Two reasons: 1. Marseille is our family cradle (from mom’s side) and 2. Gerard Depardieu. One of our French cinema heroes. Plus, it’s a first French production for Netflix.
Depardieu plays mayor Robert Taro, who gets involved in political corruption, revenge and drug lords. Wasn’t that just the reputation Marseille as a city was trying to get rid off?? Critics say these series will be appreciated by the House of Cards-fans too. Set to release in March.

HBO has a little less new releases than Netflix. We count 10 of which the following are on our To Watch-list:

Vinyl
Martin Scorsese and Terrence Winter (Boardwalk Empire) teamed up with no one less than Mick Jagger to create a series about the 70’s rock music scene. Main character Richie Finestra (Bobby Cannavale) is a record label executive hustling his way through resurrecting Be prepared for some sex, drugs, and rock ‘n roll. Set to air on February 14. At least the video below can be considered a preview instead of just a teaser:

Divorce
SJP is not on a quest for ‘the one’ like she did in Sex and the City. As the title of the series clarifies this is about divorce. The worn-out kind. That’s all we know for now, including that Sarah-Jessica Parker can be considered the co-producer as well as the co-star. And that it’s supposed to be a comedy. The release date has to be announced.

Codes of Conduct
A drama series starting with six episodes written by Steve McQueen (12 Years A Slave) which tells the story of Beverly Snow (newcomer Devon Terrell), a young African-American man with a mysterious past entering New York’s high society. Also part of the cast is Helena Bonham-Carter. Which character she plays remains to be seen. The release date has yet to be announced.

Aside from these anticipated new series, HBO is still our destination for the 5th season of GIRLS and the 6th season of Game of Thrones (Hello or goodbye Jon Snow?). Watch their trailers below:

Happy New Popcorn
Now that you’re all prepared on things to come, all you need is to sit down and tune in. We also have a new flavour of PROPERCORN popcorn for you to enjoy all these new series even better. PROPERCORN recently released the sweet peanut and almond flavour. Rich in taste, low on calories. You like peanutbutter? Then you’ll like this popcorn too! 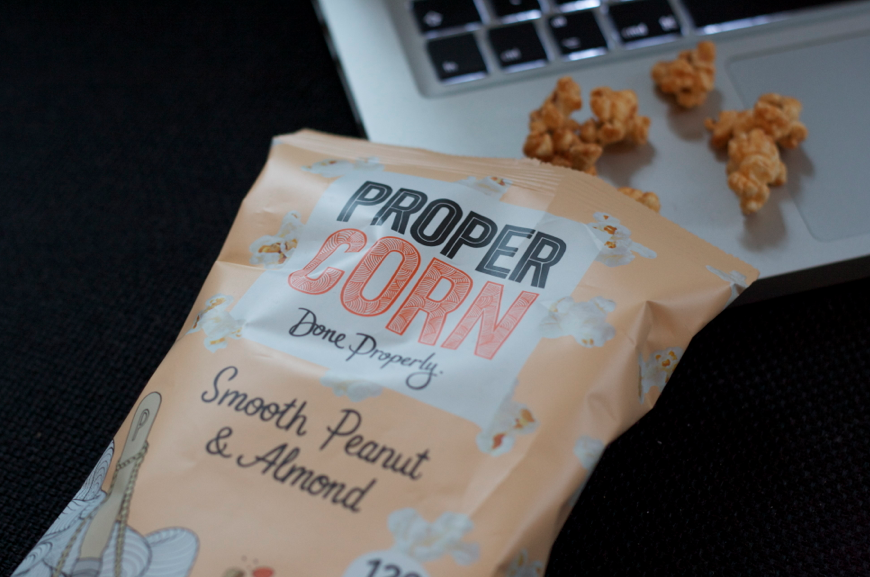 Eating this popcorn during binge-watching shouldn’t mess up with your ‘eat more healthy’ New Year’s resolution (if you even had any) either, as it contains no more than 130 calories. Hand-popped and done properly without additives but just a little natural flavouring. This is our only guilt-free snack when we don’t move our asses from the couch for a few hours, and for a reason! Make it even more fun by choosing your flavour accordingly to the series you are watching.

Of we de horeca missen is een overbodige vraag, du