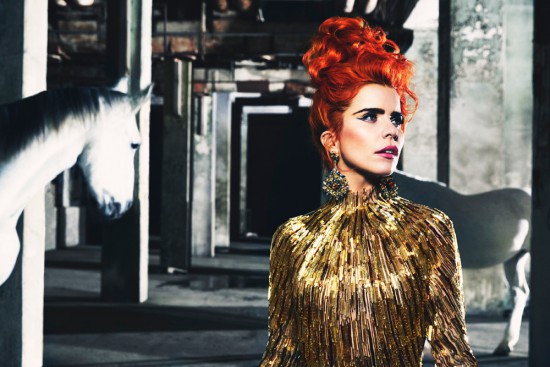 Paloma Faith. Who doesn’t know the flame haired British singer/songwriter and occasional actress by now? It has been a bit quiet since her second album released in 2012, but Paloma is back!

She’ll be releasing her third album ‘A Perfect Contradiction’ this month. A few weeks ago the redhead performed her single ‘Can’t Rely on You’ at the Burberry Prorsum show, and we can’t get that catchy tune out of our minds. Is it because Pharell Williams produced the song?

There was a bit of concern about the song though, as Paloma felt there wasn’t enough radio support for the track. She told the Daily Star: “Some of the main radio stations are not playing it. I have no idea why. I think it’s strange because it’s been produced by the biggest producers in the world.”

Obviously that problem has been solved with her performance at the Burberry show, as the track is now crawling up in the top ten of the UK Charts and rapidly conquering the international charts as well.

She will be touring soon -dates to be announced- and appear as a supporting act during Bruno Mars’ performance in Dubai on April 12.