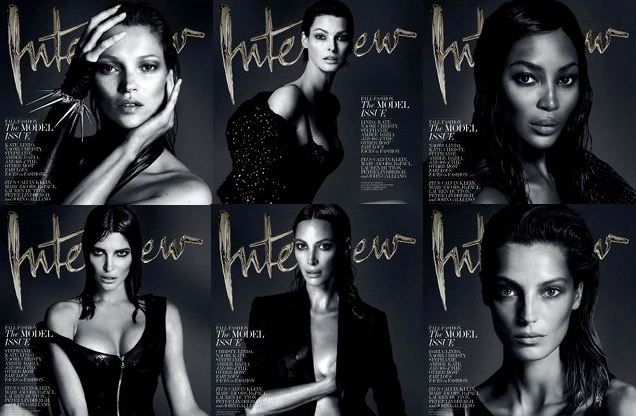 Ah, the supermodel era…If you’re an oldie like I am, you will remember the women who took the profession of modeling to the ‘super’ level.

Reminiscing on that -or maybe they just got that brilliant idea during a Throwback Thursday editor’s meeting-, Interview magazine features seven supermodels from the 80’s and 90’s on its September Issue. Only one model wasn’t quite part of the supermodel wave, Daria Werbowy, but she can be considered a supermodel of her generation.

Mert Alas and Marcus Pigott were responsible for the black and white covers. You can choose the one you prefer: Linda Evangelista, Christy Turlington, Kate Moss, Stephanie Seymour, Amber Valetta, Naomi Campbell or Daria Werbowy.

Besides of the ‘supers’ starring on the covers, they reveal a lot about themselves and their careers inside the magazine. Kate Moss for instance, is very grateful to her fellow models Naomi, Christy and Linda. She says: ” They showed me the ropes. If I hadn’t been with them, I would have been screwed. They really protected me.”

Some of them still feel protective of Kate. Especially Naomi Campbell: “Kate is like my sister. No matter how old she is—she’s going to be 40 next year—I look at her as my little sister. I was first introduced to Kate by a makeup artist who was on tour with Madonna called Sharon Gault. This was 1992. I was introduced to Kate and Mario Sorrenti at the same time. Then I met Kate again in Madrid. I kidnapped her and that was it. I kidnapped her, stopped in Paris to pick up Christy, and we all flew to Dublin together.”