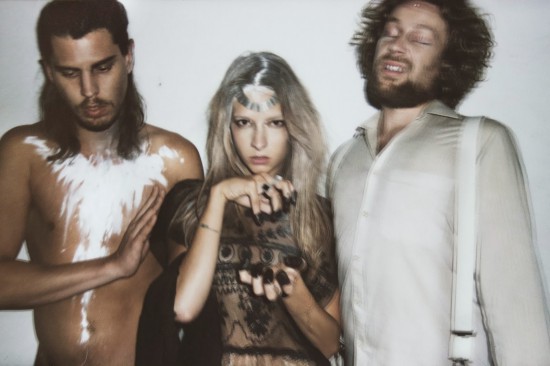 We’ve stumbled upon this band with a rockin’ frontwoman at the Liberation Day festival in the Westerpark. We just had to stop and watch the bluesy performance of My Baby.

What made us halt at the stage was a cool chick standing there with her heels and short dress (if you’ve got a pretty pair of  legs why not show them off!), playing the guitar and singing. She was rocking it big time! One needs a solid voice to be audible above growling guitars, but Cato van Dijck sure stands her (wo)man on stage.

The sound of My Baby can be described as soulful, funky, gospel blues which the band rather calls ‘delta trance, louisiana dub, indie funk’. Whatever label you want to put on it, their success is on the rise. They were noticed by Larry Graham -funk bassist of Sly And The Family Stone, Graham Central Station, Prince- and it didn’t take long before My Baby performed in significant TV program DWDD with Graham himself, which resulted in a string of resume worthy gigs.

“My Baby’s gonna ride,
there she goes thru the wild mountain thyme”
“When My Baby’s gone,
she’ll wear a crown of thorns
and weep and moan at the passersby”
Just listen to MY BABY cry.”

My Baby consists of Cato van Dijck (lead vocals/guitar), Joost van Dijck (drums/vocals) and Daniel Johnston (guitar). Cato and brother Joost are from Amsterdam and were part of the Souldiers, drummer Daniel is from New Zealand. They embarked on a world tour for a moth in February and March of this year, and now they’re back for an ‘acte de présence’ at several events and festivals. One of their next gigs in Amsterdam will be at Rollende Keukens (in our backyard as well, yayyy). For more tour dates check out their website.

Really important notice…the feature image of this article is part of a series of press shots from the band, captured by our lovely contributor and talented photographer Laura Andalou!