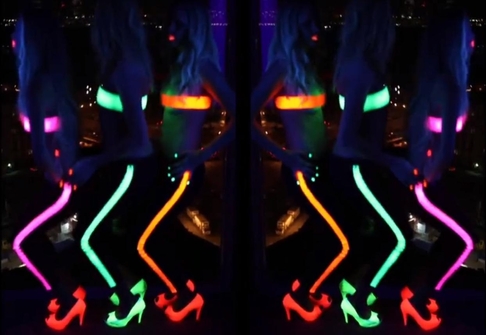 Hudson Jeans -the denim brand Georgia May Jagger has lend her lovely face to- is introducing some cool new jeans. The ‘Loulou’ is not your average skinny, but a 3.0 version inspired on YSL’s classic tuxedo -le smoking-, because of a fluorescent tuxedo-fabric strip on the sides that lights up in the dark.

This new iconic glow-in-the-dark jeans will invade New York’s meatpacking district on February 10th with a special event. Hudson teamed up with artist Aakash Nihalani -known for his fluorescent signature tape, highlighting and emphasizing elements of layering and depth already present in the urban environment- to introduce the Loulou to the New York socialites.

During NY Fashionweek, installations, wild postings of campaign images, and video projections will be present throughout the city.

The Loulou (named after YSL’s muse Loulou LaFalaise-TD) is a capsule collection, and will be available in navy with an orange stripe, burgundy with a pink stripe and olive with a yellow stripe.