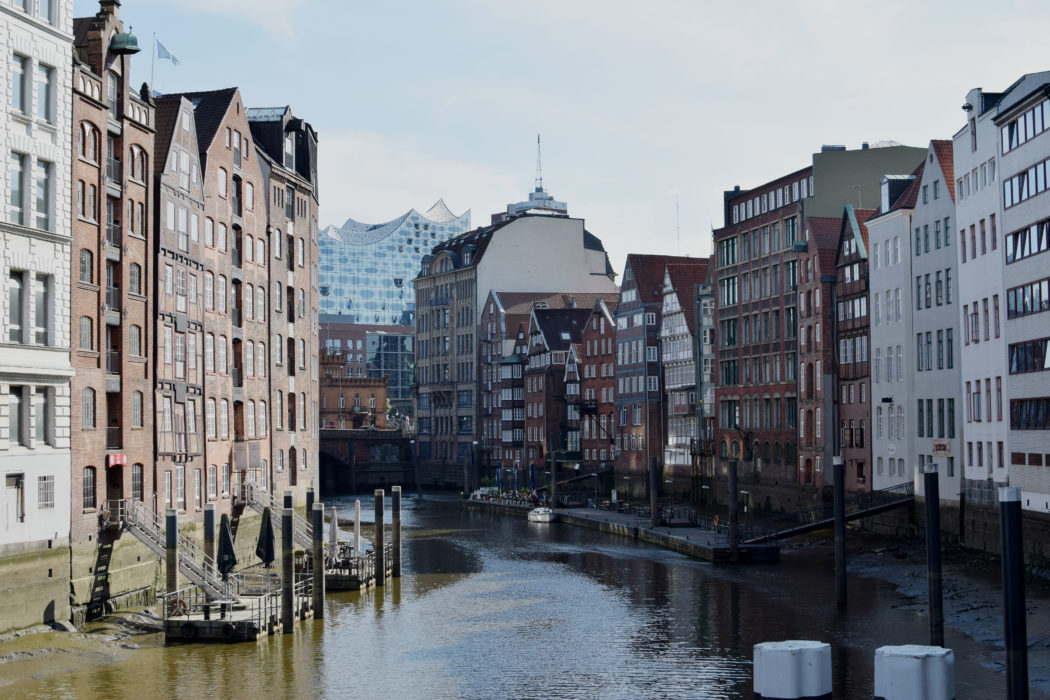 My second favorite German city after Berlin is Hamburg. It takes almost the same amount of time to get there and it has a good mix of chique and raw. There are great restaurants, the city is big but structured and it has a lot of green areas. 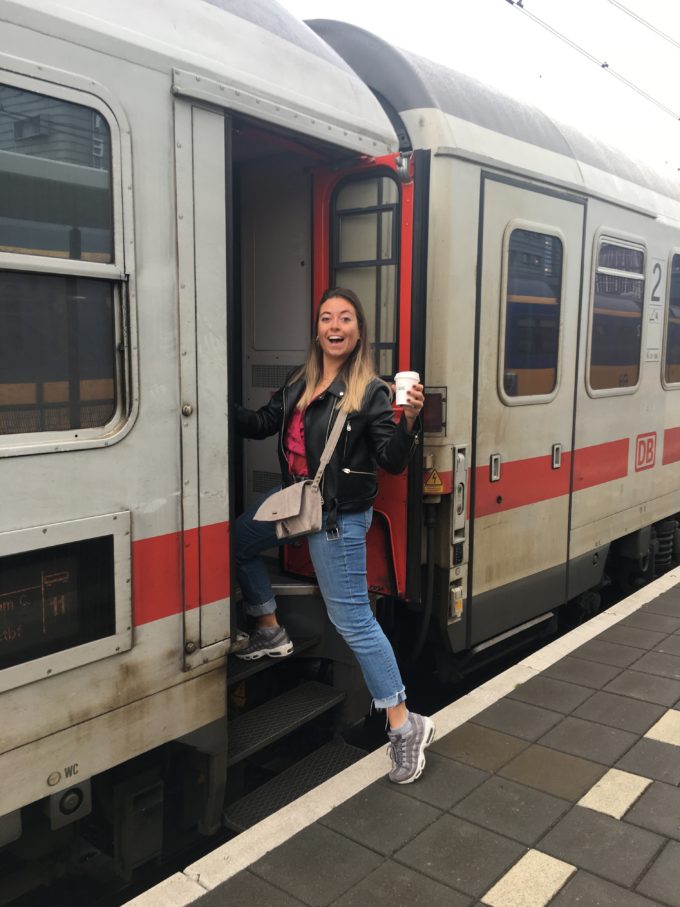 Come to Hamburg invited us and a friend, so at the end of the Month of May The Daily Dutchy  ‘s Vivian and I travelled to this lovely city. Not by air this time, but by sustainable transportation: the train. NS International takes you from Amsterdam to Hamburg in 5 hours and 15 minutes, with one switch in Oberhausen. It is even affordable to travel 1st class, and another major advantage is that you arrive in the heart of the city -which saves time – and you can go on a shopping spree without having to worry about your amount of luggage. Depends on you how ‘heavy’ you want to make it of course ;)

Packed with our trolleys, to go coffees and freshly baked croissants, we stepped on the train at 9.15 AM, to step off the train again in Hamburg city centre at 2.30 PM.

Where did we stay?
In the 25 Hours Hotel. Hamburg counts two: 25 Hours Hafencity and 25 Hours Number One (update 2020: this hotel is no longer available in Hamburg but replaced by 25 Hours Hotel Altes Hafenamt). We stayed in the latter, which is located more up North of the city. This was the first hotel within the 25 Hours concept so it’s a bit less funky than 25 Hours Hafencity or the 25 Hours Bikini Berlin (we’re BIG fans of that one!). However, we have a spacious double room with a huge sliding window and balcony. And a teddy bear welcoming us on the bed. Oh, and on the top floor there’s a huge rooftop terrace with loungers and all.
Across the street we even spotted a colonial style B&B which is also part of the hotel. Nice to know for a next stay. And, MAJOR detail: a burger truck! There’s a silver airstream at the hotel’s doorstep where they grill organic burgers. Hungry as we are upon arrival, this shall be our lunch. With sweet potato fries on the side. When in Hamburg, eat a hamburger!

Exploring the neighborhood
Because we are now in a different part of the city and further away from the center, we rely on public transport. We have a Hamburg City card that we can use for 3 days. There’s not much to do near the hotel, so we decide to go to the lively district Schanzenviertel, four stops by bus. The neighborhood is already known to me from previous visits, and I know that we are sure find very good coffee at Elbgold. We have an iced coffee on the terrace. There are plenty of sweet goodies to accompany that coffe too, but in the evening we have a dinner reservation at Izakaya, and believe me, you do not want to arrive there with a full stomach!

Dinner at Izakaya Hamburg and cocktails at Le Lion
The evening program of our first day is tightly planned, so we quickly change outfits and rush off to the center. For the longer distances it is wise to take a taxi. Ubers are not available here (no idea why), but you can pay most taxis with pin or CC, so it’s fine. Izakaya Asian Kitchen & Bar is located on the border of Speicherstadt (Katarinenstrasse, 29). You walk up the marble staircase and find yourself in a luxurious environment. The restaurant consists of two parts, and is beautifully decorated by design studio FG Style.

The host walks us to our table in the section of the open kitchen, where the chefs are meticulously preparing the dishes. If, like us, you love Japanese cuisine with a Peruvian twist (also called Nikkei), then Izakaya is an undisputable choice. A cocktail to start with: the Tokyo Trash Baby with Grey Goose Vodka, watermelon, grapefruit, champagne and wasabon sugar, and the Tagatomis Downfall with Bacardi heritage, lychee, pineapple, lime and shiso. Furthermore, we let the chef surprise us and we get a variation of signature dishes and some new dishes. Ceviche of salmon and avocado, Yellowtail sashimi with red chili, coriander and yuzu / soy dressing, the spectacular Toro tartare served in an ice-igloo, crispy soft shell crab with mango & chili lime dressing, crispy and tender pork belly with ginger tozasu salsa, a selection of Izakaya style sushi, a salad with lobster, king crab and avocado, Chilean sea bass with black beans, ginger and spring onion … What a joy!

There’s no room left for dessert but for once that’s ok, because after this delicious dinner we have a reservation at the famous Le Lion-Bar de Paris (check out the Top 50World’s Best Bars), a few blocks away. Le Lion (Rathausstrasse, 3) is a cocktail bar and it is known for the Gin Basil Smash. A fresh cocktail with, you guessed it: basil! 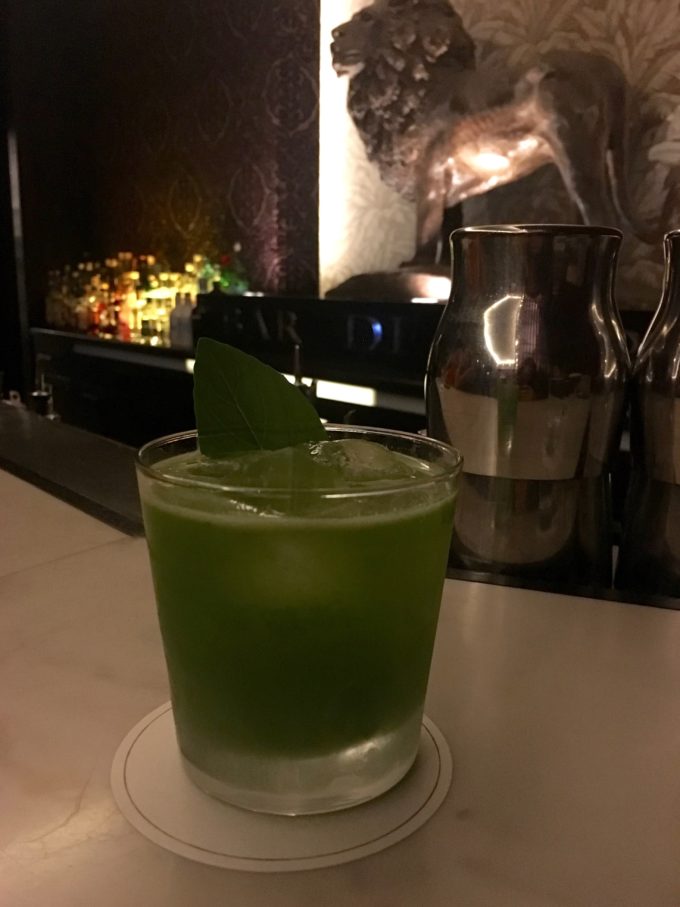 Cycling to Ottensen
The next morning we jump on a bicycle to the Ottensen district. Jawohl, mit dem fahrrad, because you can rent bikes at the hotel. For a half or a full day. We chose a half day because we wanted to see other things as well. There is a small thing you have to take into account when cycling in Hamburg though: the bike paths are integrated in the sidewalk. Instead of constructed cycle paths, part of the pavement has been snapped off. Especially pedestrians have to be alert.

Ottensen is located on the right bank of the river Elbe and borders the Altona district. It is Hamburg’s second largest shopping area, where you will find more independent shops than well-known fashion retailers. And plenty of coffee bars and eateries, a top notch supermarket (Rewe) and all kinds of cultural establishments such as the Zeise Factory: a cinema in an old ship’s propeller factory with a courtyard and terraces where you can chill with your beer in the sun.
Ottensen is also known for its stately homes. Some parts were indeed well endowed with a clod of villas per square meter, where apparently the Hamburg beau monde took up residence.

A few more Ottensen tips to shop and eat:
24 Colours – Bahrenfelder Straße 151: A shop from Berlin where they have nice items for affordable prices. There are only 400 pieces made of each item
Su – Bahrenfelder Straße 107
L’Ephemere – Bei der Reitbahn 3
>>>
Lieben Bisschen – Spritzenplatz 5: Beautiful tearoom offering home made cakes that are also available for takeaway
Rain Cafeatery – Große Rainstraße 15
Knuth – Große Rainstraße 21
Mikkels – Kleine Rainstraße 10
Kaiserwetter Zeise – Friedensallee 11: For a quick lunch and the most kitsch trays ever. It is actually a catering company but they have a big lunchroom/take away in Ottensen

Planten und Blomen park
Hamburg has a lot of greenery and perhaps the most beautiful park is the well-known Planten und Blomen (Marseillerstraße), which dates back to 1930. It is a public park where you only pay an entrance fee for a visit to the Hortus Botanicus, same as in Amsterdam. For the rest you can walk around freely in the vast park, sit on a chair with a book or just lie in the sun. We were particularly curious about the Japanese tea garden where they organize daily tea ceremonies. We were too late for that, but we did get a cup of green tea and briefly felt as if we were in Japan between the bonsai and cozy ponds. From here it is about a half an hour walk to Speicherstadt where our next dinner venue is located: VLET. A restaurant with a modern twist on Hamburg cuisine.

A table with a view
If you happen to be in the old Dock quarters with all its brick warehouses and canals, it’s a nice extra to have a view of it all while having dinner. Anything for the photos of course! We arrive at VLET relatively early (Am Sandtorkai 23-24) and we get a window seat (yesss). Up next is a 3-course surprise menu which reflects what the Hamburg cuisine stands for. First some small appetizers and various sorts of bread: potato, with pumpkin seeds and dried pear, and with red cabbage and cumin. And two different butters: goat butter and regular butter. The starter is a buckwheat pancake with smoked swordfish, shallots cream and caviar. The waitress tells us that the menu is inspired by what the dockworkers used to eat, but in a contemporary adaption. Like the main course ‘Labskaus’, a typical dish of which the original version consists of stewed meat, beetroot, pickled herring and mashed potatoes. Sounds like a bizarre combination, but our ‘deconstructed’ and modernized version of the dish is tasty. A bit heavy though because it is quite a chunk of meat. The dessert is a pear compote with crumble and pear ice cream. Followed by a cocktail of Tanqueray gin, infused with tea and lime juice. There is no need to visit a cocktail bar this evening…

We have a half day left before we return home. The plan? Shopping in the Schanzenviertel.

Best coffee in Hamburg
Shopping makes thirsty (and hungry), and Törnqvist (Pferdemarkt, 12) caught our eye. The owner, Linus Köster, is a Dane, has studied in Groningen and speaks a little Dutch. He tells us that the coffee shop is named after his beloved deceased grandmother. That’s so sweet! Törnqvist is a treat for the coffee purists: you order ‘specialty coffee’ from all corners of the world. Linus prides himself for finding the best ‘roasts’. I express my preference for a caramel-nutty flavor, which is immediately addressed. Adding oat milk to my Flat White isn’t a problem either. The sweet tooth among us can order fresh croissants and cinnamon buns with their coffee. The interior design of the coffee shop also deserves a special mention: all black and white with a few plants. Scandinavian minimalism at its best. No doubt this is our favorite coffee shop in Hamburg. 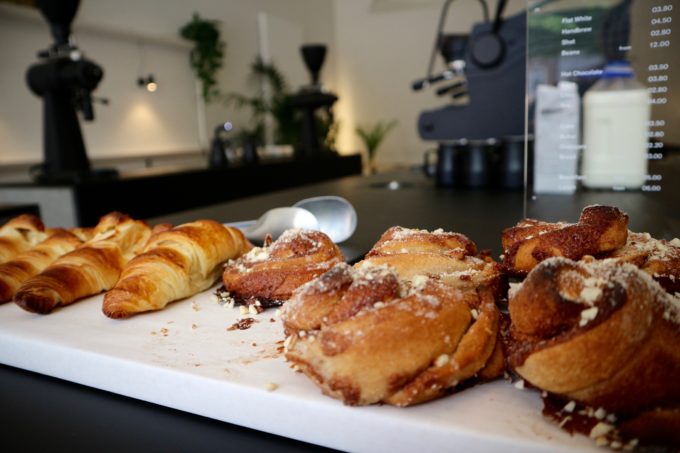 Berlin vibe
The Schanzenviertel feels a bit like East Berlin.  The gentrification has struck here as well, with walls richly decorated with grafitti and most shops being small multi-label boutiques with affordable items. Some may call it hipster, but hey, we don’t mind. Dutch optical brand Ace & Tate (Schanzenstraße, 27) also settled in this area. You can explore it best by wandering around the neighborhood as long as you keep the two main streets in mind -the Schanzenstraße and Susannenstraße- where you’ll find some cool shops:

Because we have to spend a reasonable time in the train again, and we did not have lunch yet, we decide to take a seat at BOK. We walked by a few times during our shopping spree and spotted many locals enjoying their lunch. It’s an Asian foodconcept where you have a varied choice of dishes: from Chinese Wonton soup to Vietnamese Pho, from noodles to sushi. They also offer daily specials. Note: make sure to have cash on you because they do not accept foreign debit cards, which can be inconvenient if you are not aware of that. Nevertheless, it is a spacious venue with a modern interior and you get served a good portion of food for an acceptable price. 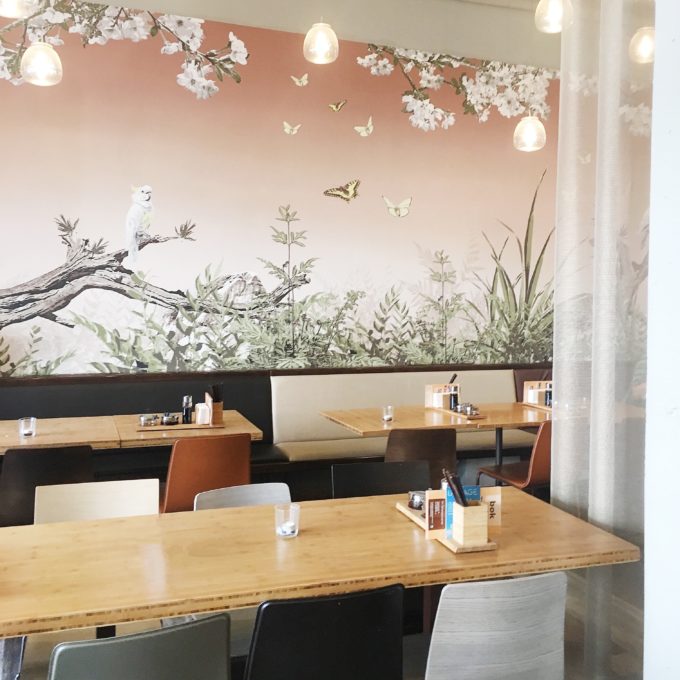 Curious where we’ve been in Hamburg during previous visits?>>>> Read it here.

Published in ALL ARTICLES, Europe, Lifestyle and Travel