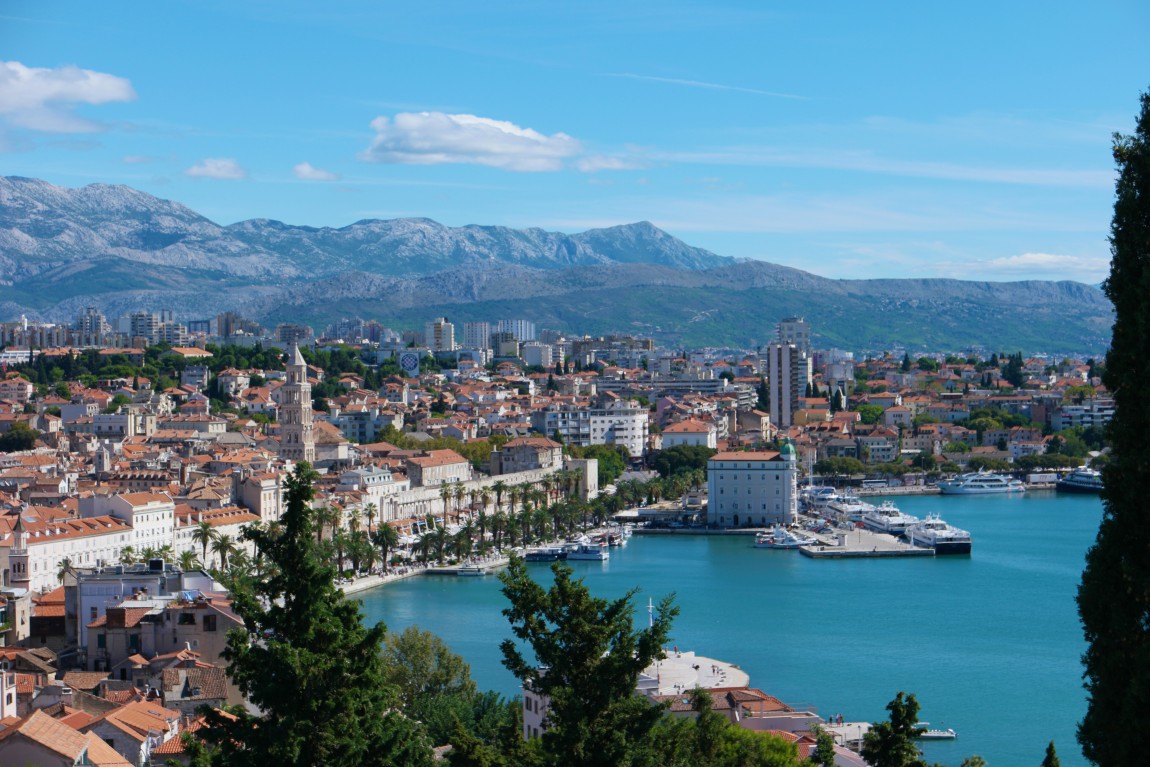 Europe by easyJet: 36 hours in Split

Croatia was quite high up on my list, and in the last days of September, Sabine from Yourambassadrice.com and I hopped on an easyJet plane in direction of Split.

It is one of the popular destinations on the Adriatic coast, and perfect for a post-summer getaway. Though we wouldn’t mind going in Spring as well! We’d rather avoid the high season because it’s packed with tourists, yet combining with ULTRA festival wouldn’t be a bad idea either… 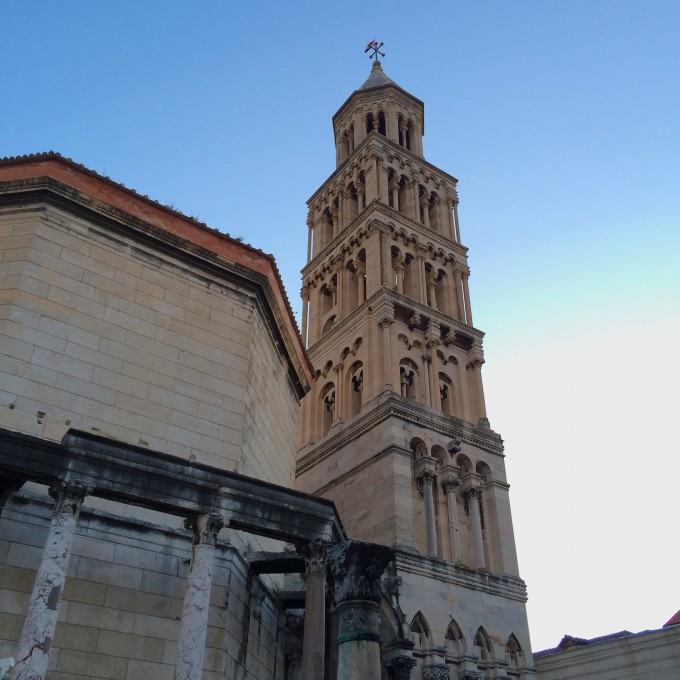 Sleeping in a palace
Split is a very compact city, and most part is settled in the old Diocletian palace, a UNESCO World Heritage site. We got a great hotel via Booking.com –Split Antique Luxury Rooms (Poljana Grgura Ninskog 1)- settled in the palace’s remains, with the nicest hosts and a view on the St Dominius cathedral. It’s a funny idea to be sleeping in what used to be an emperor’s home… 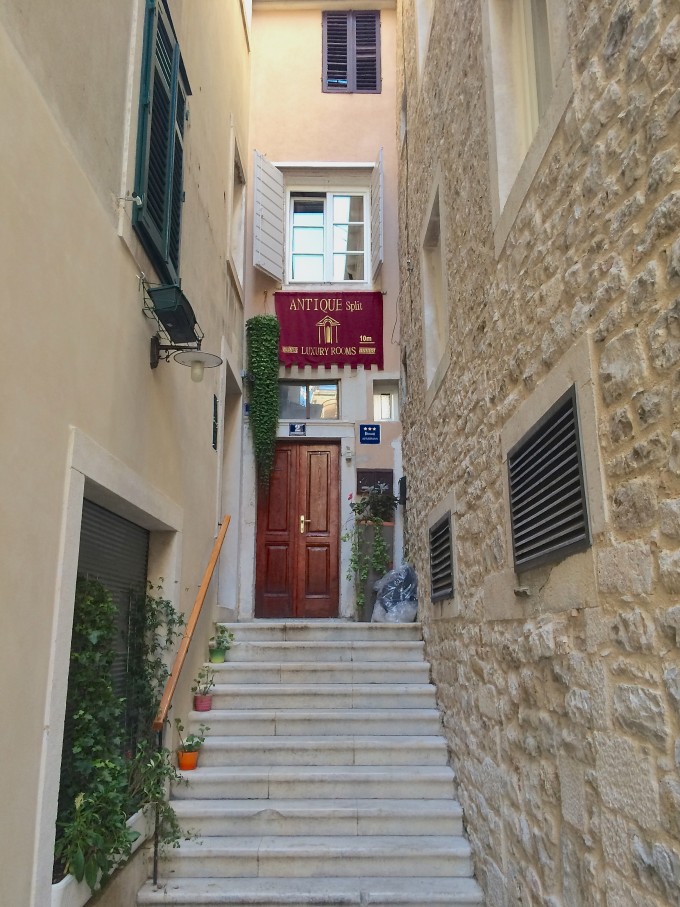 Everything within the palace walls is reachable by foot, but even outside, a walk to the hill or the beach won’t take you more than 20 minutes. And walking is good for you anyways.

We took a cab from the airport, but you can also take a shuttle bus (the airport is 20 km from Split). Arriving at the Riva (the seaside boulevard), we were awaited by one of the hotel hosts to take our luggage and walk us towards the hotel, right through the palace’s caves, which we will tell you a bit more about later. The first shout out is for the warm welcome we’ve experienced. We got served fresh drinks and a short explanation on how to roll around town. The young generation of Croatians speak English very well and they’re proud of their beautiful country. 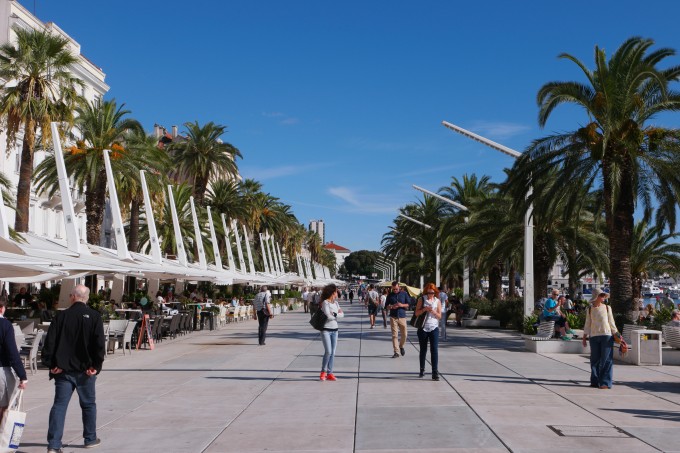 Discovering Split’s tastemakers
Our foremost interest was to discover the Split hotspots, and we did some research beforehand which led us to our first dinner spot: Mazzgoon (Bajamontijeva 1). It’s one of the newest popular restaurants tucked away in a narrow alley (the old town mostly consists of alleys and squares), with a cosy patio terrace. It was a bit too chilly for us to sit outside, so we settled at a table facing the kitchen. The menu is a mix of typical Dalmatian dishes with a modern twist. Since we’ve heard that the Dalmatian prosciutto is very good, we chose an antipasti platter as a starter, containing a very tasty selection of cheeses, and cured meats. Of course accompanied by a Croatian white wine. The words ‘pasta’ and ‘truffle’ directly caught my attention on the menu, so the choice for the main dish was rapidly made. Fresh linguine with a rich, creamy truffle sauce and King prawns. Very yummy but so filling! The owners didn’t want us to leave without having a piece of raw chocolate cake as dessert, but it was almost impossible to eat it. Mazzgoon is a nice place with a cosy ambiance, serving good food. 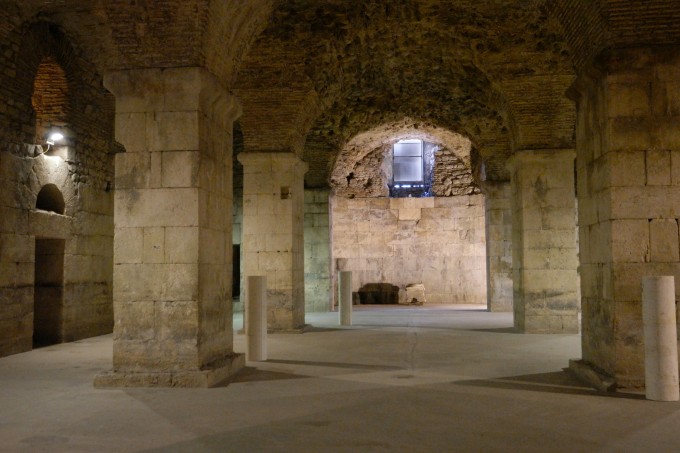 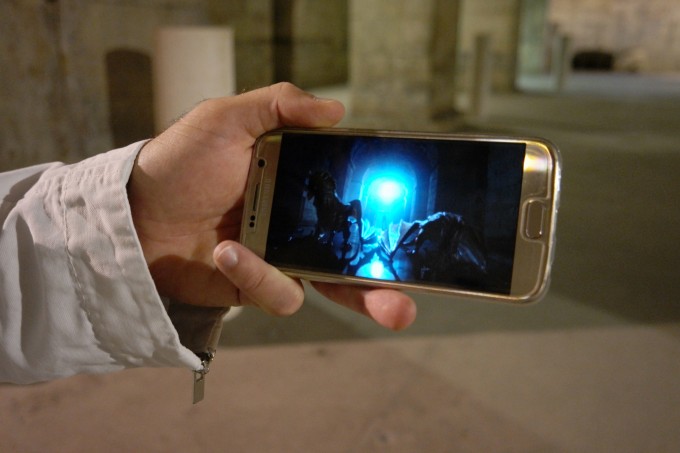 The next day we made a little tour around town with a guide, who took us to the exact spot in the palace’s caves where three of the dragon scenes of Game of Thrones were filmed (watch one of the scenes here). Many scenes were filmed in Dubrovnik, and -less obvious maybe- in Split too. You can see which scenes have been filmed in Split here, and even book a GOT tour. If we’d just known before…(major Jon Snow crush here). 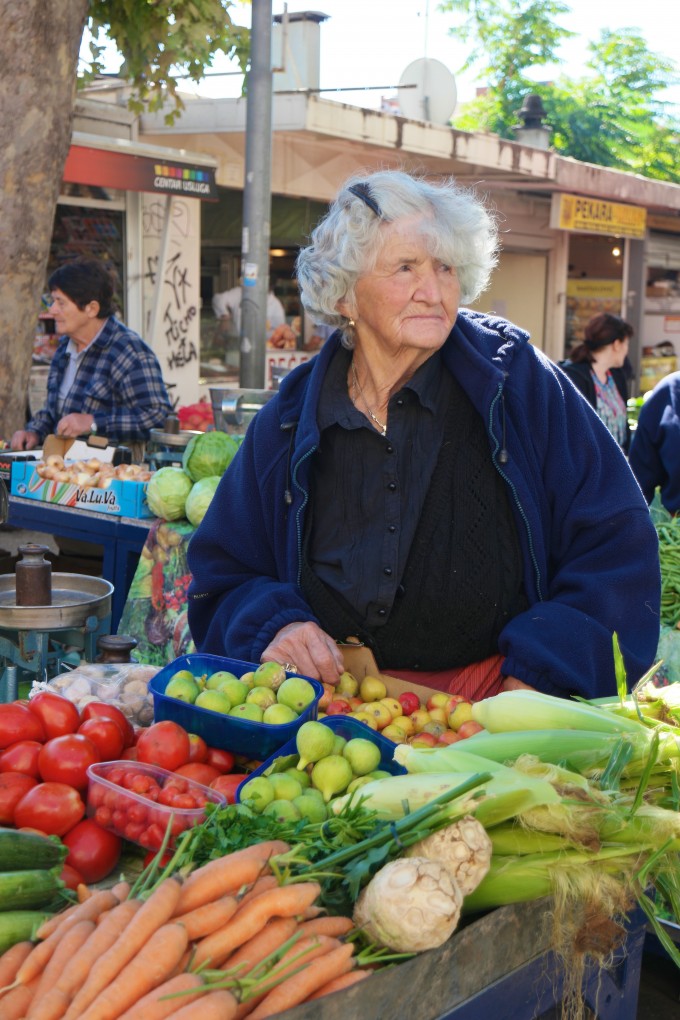 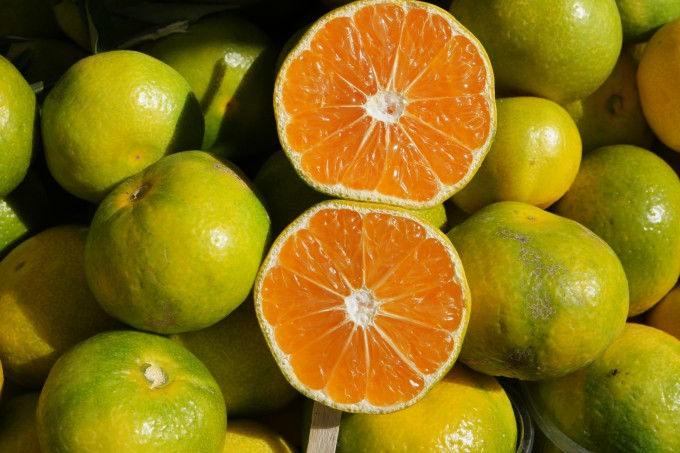 Afterwards we went to the market where local farmers sell their produce and where you find specialties from the area such as dried figs, chard, pomegranate and a sort of clementine which is green from the outside but orange from the inside. Split has an important fish market too, yet most fish mongers had left the building since we were a little late. Nearby the fish market is a design hostel –Goli + Bosi (Morpurgova Poljana 2)- where a department store used to be. The new owners kept the escalator, which looks a bit awkward but fun. The hostel has its own snack/pizzeria named ‘De Belly’ (according to our guide this means ‘fat guy’ in Croatian), with a daily changing menu. 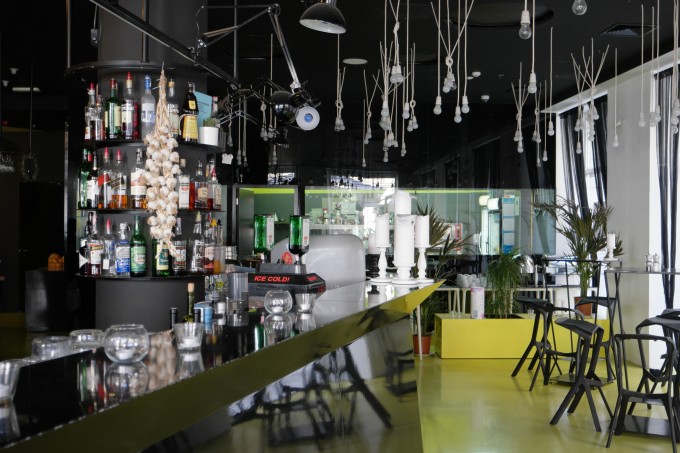 During our tour we stumbled upon the Kokolo Juice Bar (Trg Braće Radić 15) at one of the squares. Even though it’s seasonal you should not miss it! They have a great choice of healthy juices, fresh lemonade and smoothies, but if you care for a shot of Domestic Fruit Schnapps, you’ll find it here as well. What we also loved about Kokolo are the cute seats. They’ve managed to create a cosy corner on the square with the limited space they’ve got. 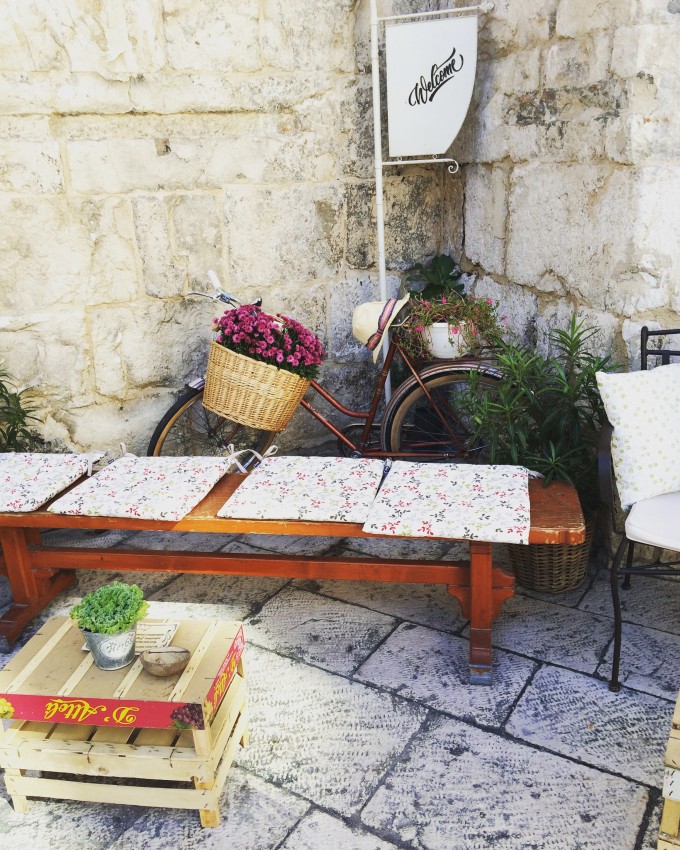 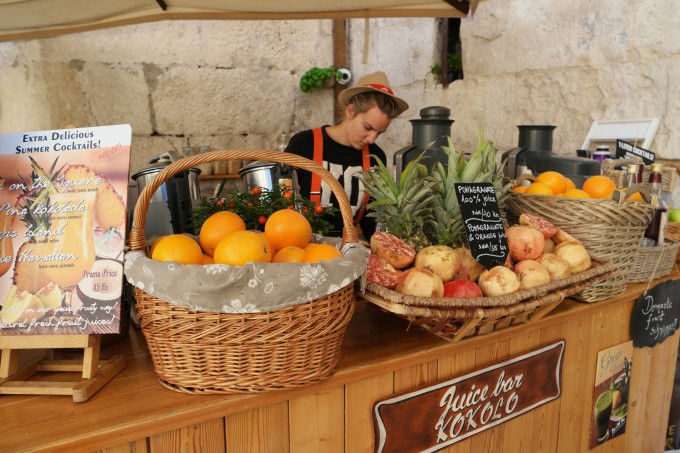 Something I’m always interested in, are the local, traditional pastries, because it truly reflects what people eat and bake throughout generations. The best place to get these goodies is Tradicija (Bosanska 2). They provide the Split locals with cakes and cookies since 1937. Too bad I had breakfast shortly before, otherwise I would have bought some. But we did have a bite of a shortbread kind of cookie with an almond filling which was very good. 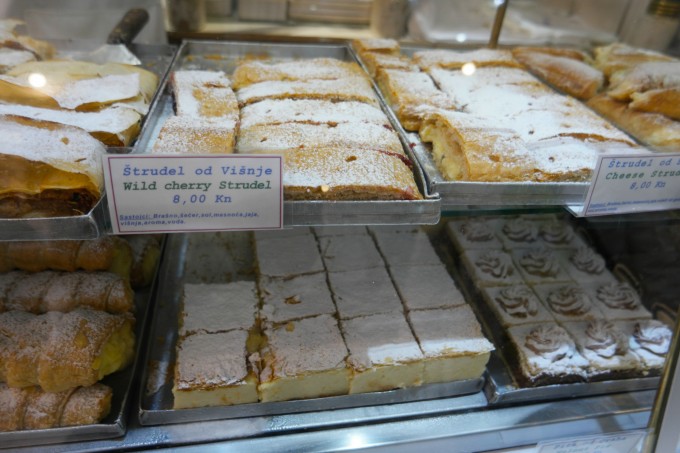 After touring through the narrow alleys within the palace’s walls, we moved on to the Riva and walked up west side towards the Marjan hill. It was time to soak in a splendid Mediterranean view, and it did not fail to disappoint us. With an ice coffee in our hand and the warmth of the sun on our heads. Half an hour of enjoying the turquoise sea and an ancient city at our feet before heading to Konoba Varos (Ban Mladenova 9) for lunch. Konoba’s are traditional tavern-like eateries, so don’t expect culinary artworks on your plate. It’s nice to experience the local vibe as we were surrounded by quarreling old chaps while having a pulpo salad and clam spaghetti. 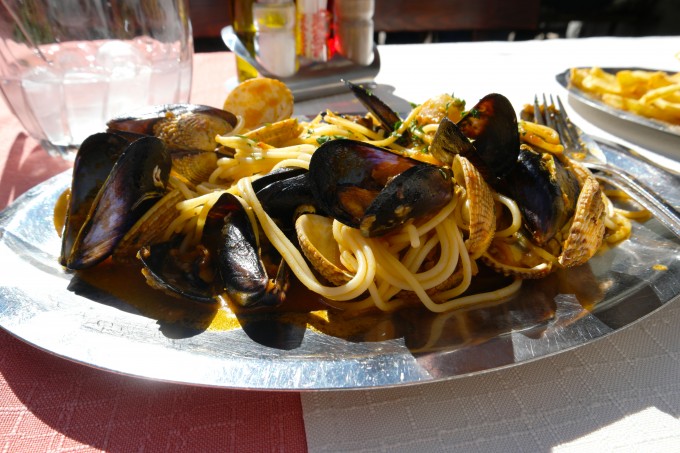 For the evening we aimed at having drinks during sunset on the roof terrace of Paradigma (Ulica Bana Jelačića 3) -one of the few fine dining venues-, but they only serve dinner. Instead we had drinks at the beach and enjoyed an amazing sunset there, and decided to check out another hotspot for dinner: Bokeria (Domaldova 8). The interior is very cool, which actually lured us in, yet the food was a tad disappointing. It lacked some finesse and sounded better on the menu than it actually tasted on our plate. On the bright side: the waiter was friendly and they serve the wine from Brad Pitt and Angelina Jolie’s property in France.

During our stay we were unfortunately a little too tired to do after dinner drinks, even though we stumbled upon some nice spots to do so. There’s an array of wine bars, cafes and terraces. An iconic spot is on the steps of Diocletian’s palace, where you can also enjoy live music each night. 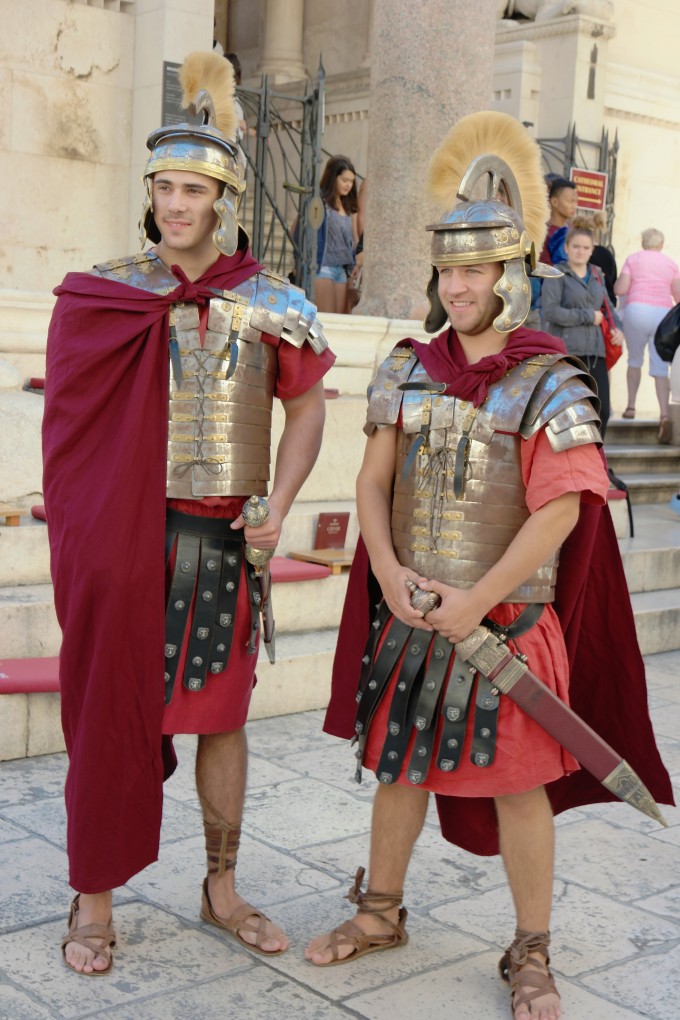 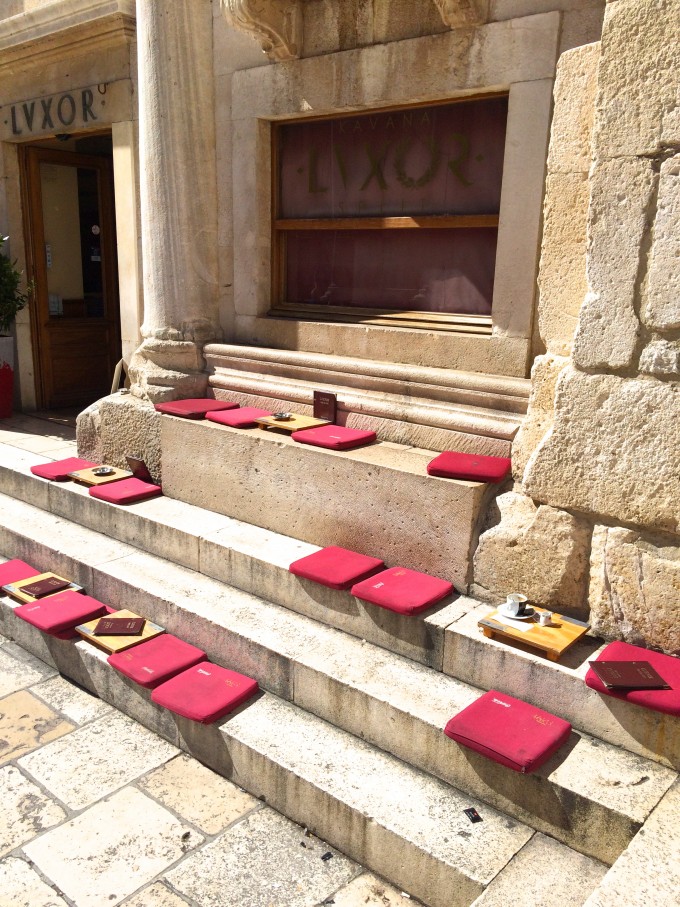 Our last morning we had breakfast at Bistro No Stress (Iza Lože 9), where the poached eggs tasted great and where they have the funniest quote on a chalkboard (‘Hungry? We will feed you. Thirsty? We will get you drunk. Lonely? We will get you drunk.’ These Croatians have quite the sense of humor). In our quest to find some cool shops, there was actually just one boutique that made the cut: ID Conceptstore (Bana Jelačića 3). It’s settled below Paradigma and they sell labels we love such as Ganni, One Teaspoon, FRAME denim and Rika. 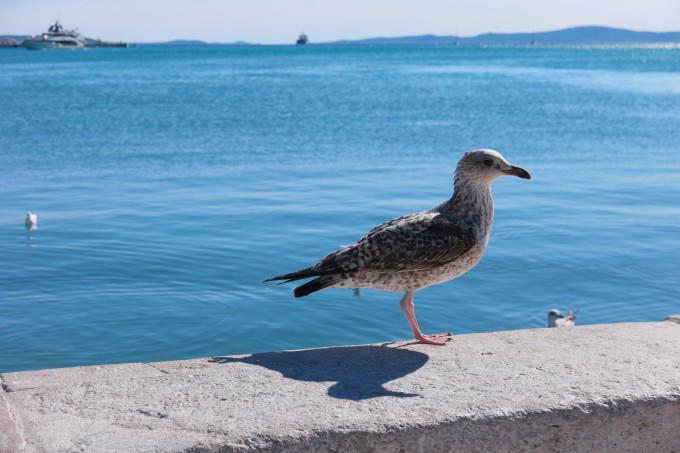 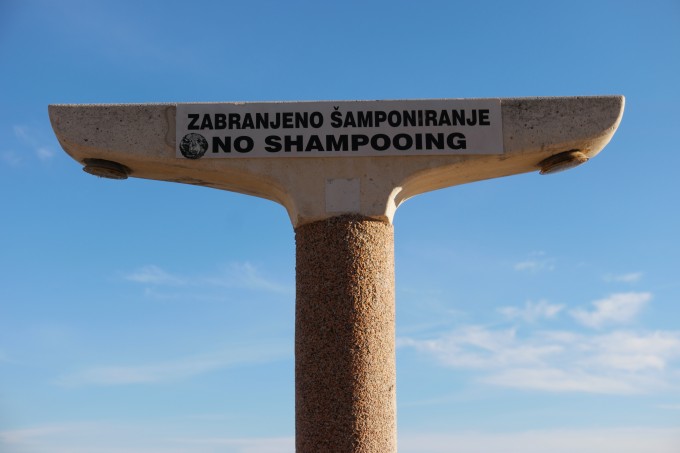 Marjan Hill & Old Town
For those into hiking there are some nice trails to follow in the Marjan Forest Park. Before going down to the city enjoy a coffee (or beer) with a view at Teraca Vidilica (Prilaz Vladimira Nazora 1 | Marjan Hill)

Visit to the island of Trogir
Unfortunately our stay was too short, because this small island is worth the visit. The local bus Nº37 will take you there in 40 minutes 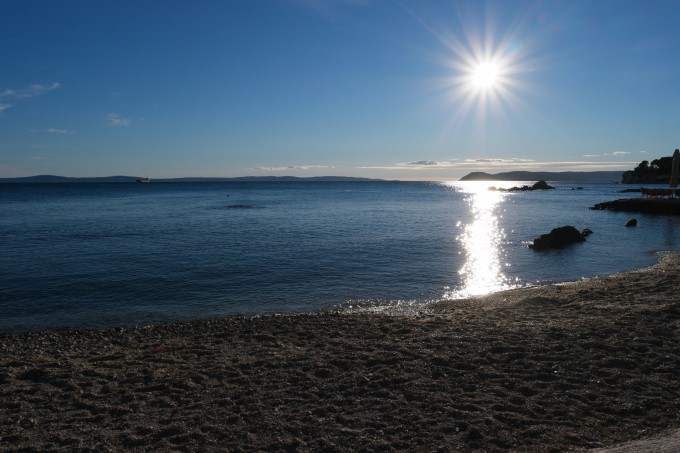 Practical information:
easyJet offers flights to Split in low season 3 times a week (Mo, Fri, Sat) for an average rate of €29,06 p.p. You can already book your tickets for coming Spring or Summer season, the flights from Amsterdam to Split will be available again from May 6, 2016 until September 4, 2016.
Contact the local Tourist Board –Visit Split– for guided tours, excursions and any other info you might need during your trip.

Croatia has its own currency: the Kuna. There are enough ATM machines available at the airport to provide you with cash, and most shops and restaurants accept credit cards.

easyJet is celebrating its 20 years anniversary which means there are plenty of good offers for your getaways.

All images © The Digitalistas with the Samsung NX500 and iPhone.

Published in ALL ARTICLES, Europe and Travel