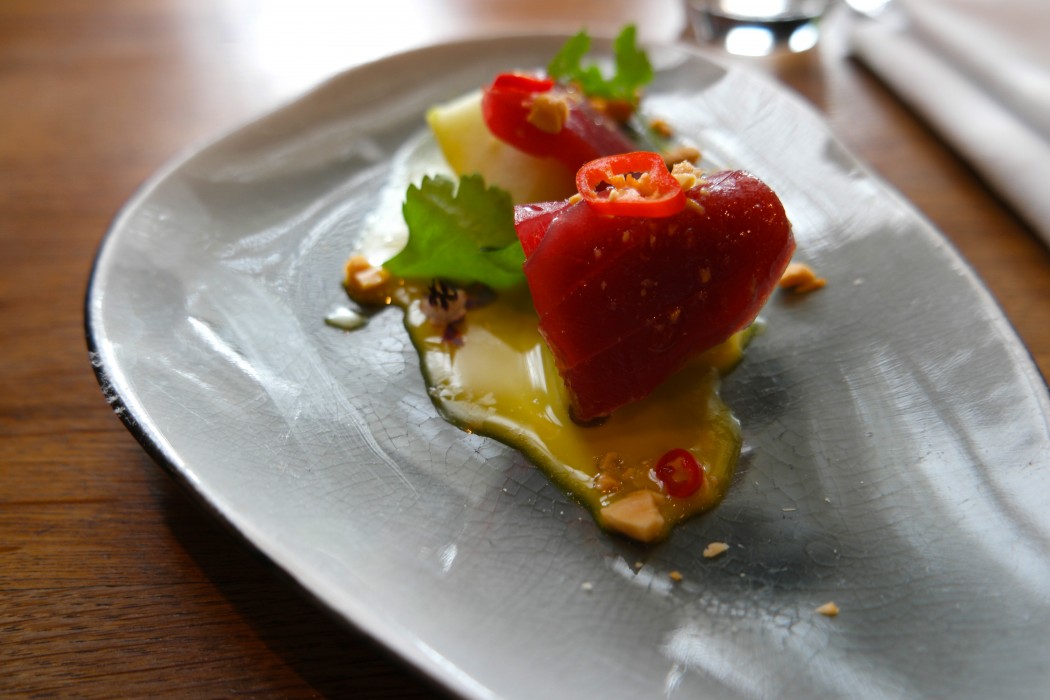 My introduction to the Israeli haute cuisine immediately made a good first impression. Chef Hilel Tavakoli restaurant Pastel and Ron Blaauw joined forces for a great lunch as a preview to the Amex Round Tables Tour event in Tel Aviv. 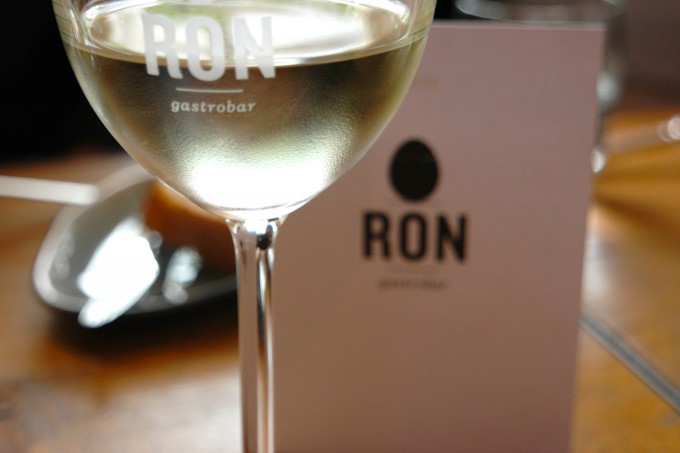 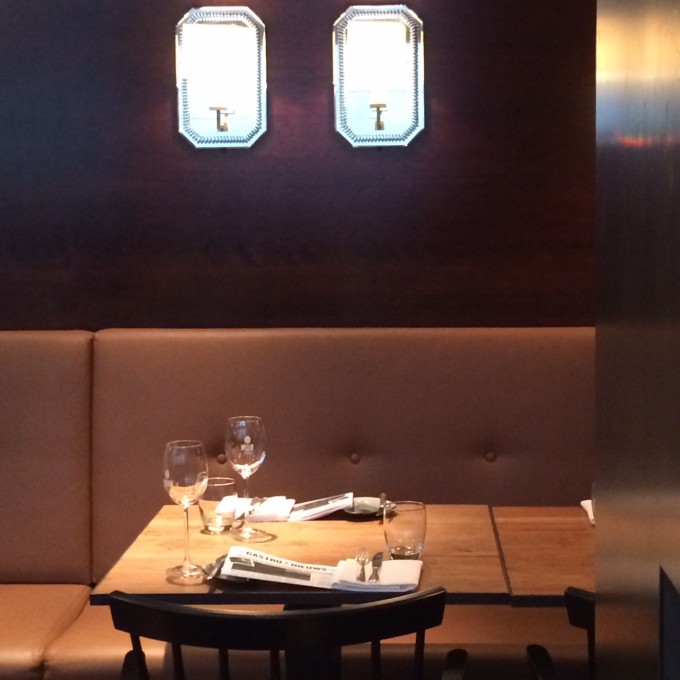 While the rain was pouring outside, we were warmly welcomed at Ron’s Gastrobar, by, amongst others, the Ambassador of Israel. The aim of the afternoon was set to present us the rich and special flavors that make the Israeli cuisine . The wines we got served were from Israel as well. I had not tasted any before but they are beautiful, full-bodied wines that deserve more attention.

The first course was already a favorite: Tuna sashimi with yellow curry, avocado and green apple. A nice combination of flavors and textures. This was promising. The following dish was a Cream of foie gras with a sauce of black berries, poached peach and toasted almonds. Foie gras is often a point of discussion, but it’s not about to disappear from the menu of most top restaurants. It remains a delicacy, which proves to be a versatile ingredient in in this dish, combined with the sweet and juicy peach and given a ‘bite’ with the hint of roasted almonds. The blackcurrant coulis completed the marriage of flavors with the so-called “acidity”. 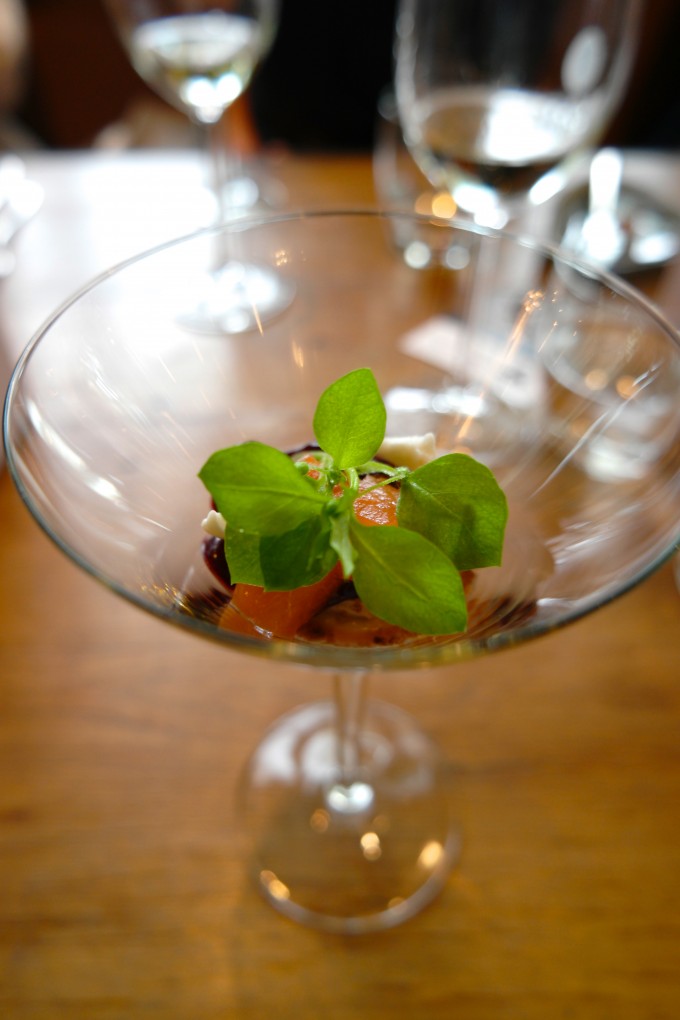 The third dish was a Salad of King prawns, cow pea, green asparagus, cherry tomato, yellow beans and za’atar. Again, very tasty with a Middle Eastern touch provided by the za’atar (a kind of wild oregano that tastes like thyme and oregano in one, which is finely ground and mixed with sumac and sesame seeds).
This was followed by Calamari on a bed of pickled red cabbage, cherry tomato and cumin vinaigrette. The latter is my least favorite spice, unless it’s used with moderation. 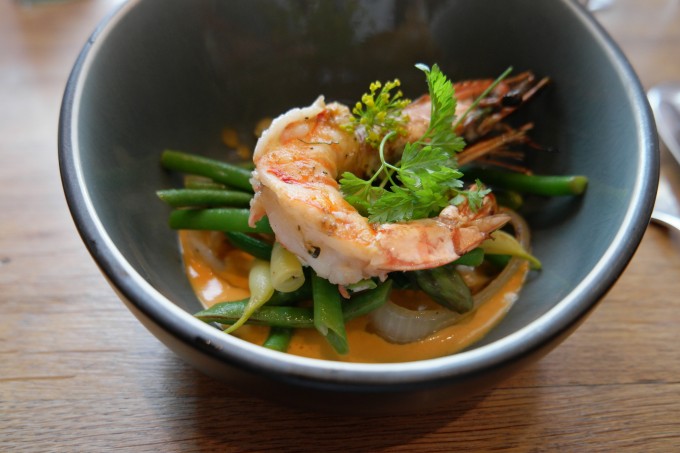 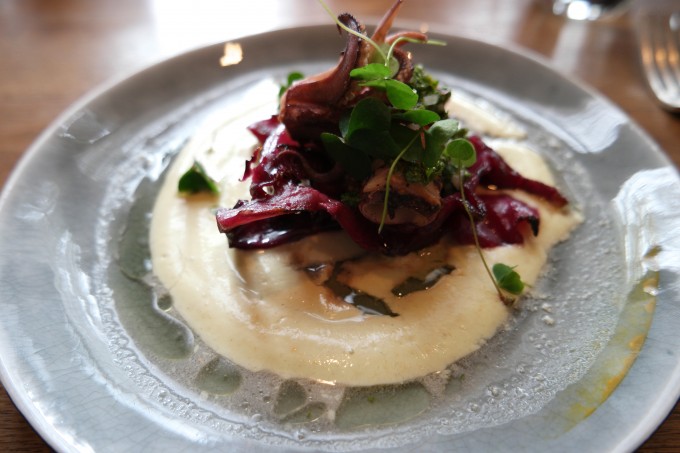 Then the meat came in: BBQ spare ribs with homemade sambal, mashed horseradish and beetroot and Rib steak with chimichurri, bone marrow and Béarnaise sauce. The ribs were deliciously caramelized and fell off the bone. Like well prepared ribs should. I actually felt the beetroot with the horseradish puree were a bit unnecessary additions to the dish. The spare ribs were already fine as they were. And then the rib steak…it melted on the tongue, with a smooth rim of fat. You’re supposed to eat it in one bite, together with some bone marrow and Béarnaise. For meat lovers this was really fingerlicking good. 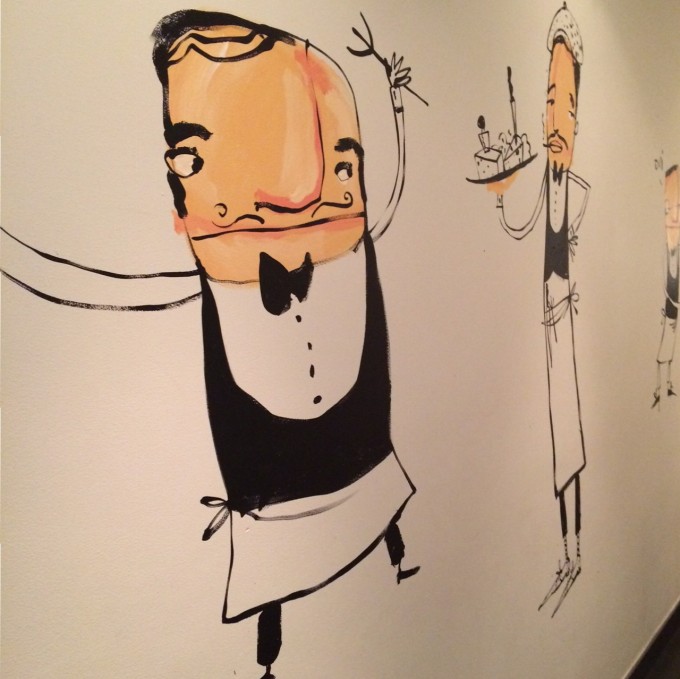 So what is my opinion on the Israeli cuisine (of course don’t forget to take into account the level of this gourmet lunch)? Beautiful, rich flavors. Exciting combinations and attention to texture. I was very pleasantly surprised. And now I’m curious what more culinary surprises this country has to offer.

Published in ALL ARTICLES, Events and Food