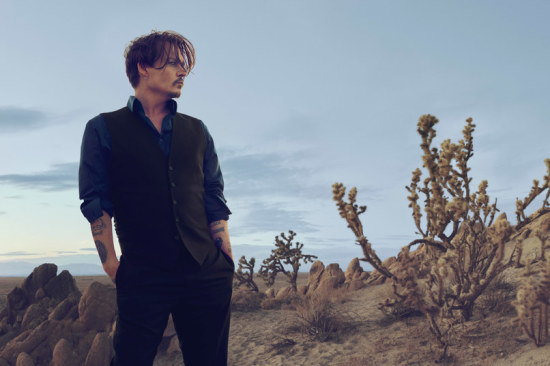 Here’s Johnny. Escaping the LA night, driving to the desert and make a pit stop at the mystical Joshua Tree. The decor and music suit him quite well, but what is he doing wearing eyeliner in the freakin’ desert?! You’re not the Jack Sparrow character here Johnny….

What do you think of the result?

We don’t know how the new fragrance smells like yet, but according to GQ it is something like this: ‘We want to say it’s like a really good-smelling wild man who travels the desert with a coyote. But that’s incredibly vague and sounds gross, so we’ll just say it smells kinda fresh and spicy. And somehow familiar.’

But, we’d rather go with the fragrance’s developer,François Demachy’s explanation of what it contains: ‘Firstly, there’s Calabrian bergamot essence – developed by the perfumer-creator and specially produced for Dior – whose ramped-up sharp and lightly peppery accents have the force of fresh and powerful gust of air. Next comes blended elemi incense resin, spicy notes of Sichuan pepper and pink berries, piquant geranium, the strength of vetiver, the aroma of the wild scrub of Vaucluse lavender, and patchouli, purified through double-distillation, to elegantly bind the whole. Lastly, there’s ambroxan, a rare molecule extracted from ambergris, which uniformly releases its marine and animalistic notes to trace the skyline of a fragrance that evokes the compelling wildness of the great outdoors.’ (source: Diormag)

Between those two you can make up your own idea of Sauvage, or go to the shop and experience it yourself.

Published in Beauty, In the NOW, Lifestyle, malemadnessmonday and Video