We can count some young, talented chefs among the more known and settled names in the Dutch culinary business, and Jaimie van Heije is one of them.

The 30-year old chef is so passionate for his craft, yet humble and a bit shy even. He took over the restaurant of his mentor Ron Blaauw in Ouderkerk a/d Amstel, a village at the fringe of Amsterdam, which he now successfully runs with his young team and lovely girlfriend Marlous by his side.

Jaimie invited a bunch of food bloggers and lifestyle editors over to his kitchen to cook up the starter: a dish inspired by flowers he spotted on a recent trip to Bali. Marlous tells us laughing: “Sometimes he disappears for a few hours because he is intrigued by something he has seen and which later pops up on a plate in the shape of food.”

It’s the kind of creativity we appreciate in a chef, and when we ask him what would have been his second professional option, he says he would have liked to be a draftsman for Disney movies. Actually, that was what he planned to become -cooking was plan B- but when he visited the art academy he realized it wasn’t his cup of tea.

The playfulness of drawings did find its way to his restaurant though. Artist-friend and painter Selwyn Senatori made some cool murals, giving the place a relax and unpretentious vibe which attracts the crowd Jaimie aims for: people who enjoy food and want to have a good time.

We sure had a good time, starting with the Balinese flower-inspired Ceviche of Pollock, radish, watermelon, yuzu and basil. The ingredients were all prepared, so we actually built up the dish together with Jaimie and his team. It’s interesting to see how precise he is in the appearance of the dishes. He also told us that it can be frustrating for a chef when people turn and toss the plate to make Instagram pictures, because he serves the dish exactly like he visualized it. It’s like an artwork the artist doesn’t want you to mess around with.

When we all finished our ceviche we got seated at the long table to enjoy the result, followed by the Paella Nero; black (squid ink) rice, a lobster croquette, sautéed sea bass, langoustine, a jus of crab and the beautiful (edible) Nasturtium flower. 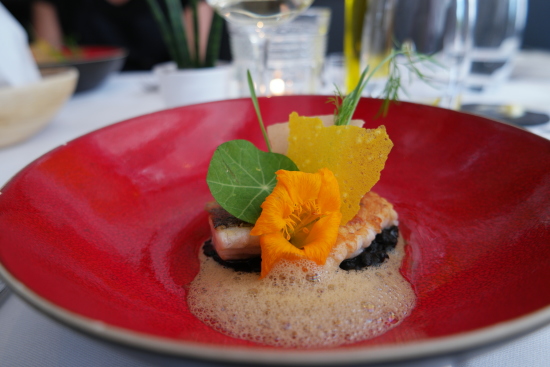 There are many references of the Indonesian cuisine on Jaimie’s menu, courtesy of his roots and love for Asian flavours. His Indonesian grandmother inspired him a great deal, and his personal favorite dish is his gran’s Tempe with sayur, long beans and rice.

We concluded lunch with Jaimie’s strawberry creation which consists of a strawberry crèmeux, a cream of verbena, sponge cake and a sherbet of wild strawberries and lime. 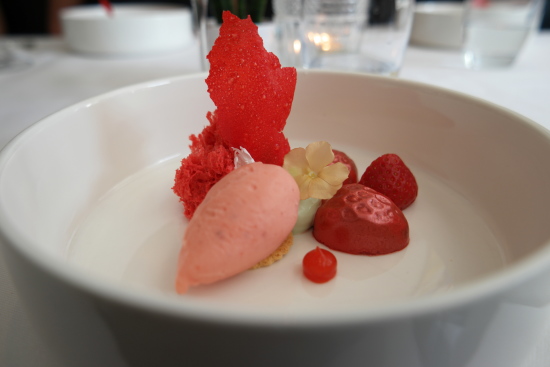 Consider visiting the cute village of Ouderkerk a/d Amstel once in a while and get yourself a table at Jaimie van Heije’s namesake venue. You can opt for a 3-, 4-, 5-, 6-, 7-, or 8-course menu, the ‘Volle Bak’ (6 -course including wine arrangement) or à la carte with the reasonable price of €14,50 per dish. We promise you won’t be disappointed.

All images © The Digitalistas – photos made with the Samsung NX 500

Finally! We can enjoy the start of Summer in our f