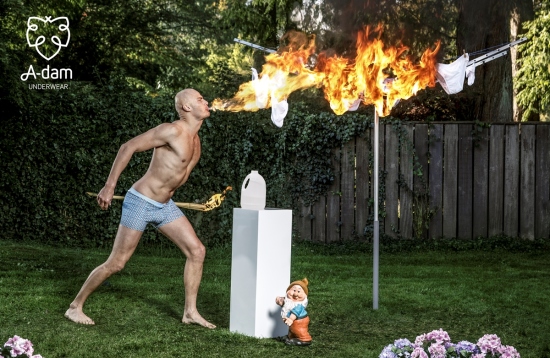 Tired of looking at Calvin Klein underwear models with their perfect 8-packs and sultry stares? Rather see tough guys in a pair of boxers? Comes in A-dam Underwear.

The new Amsterdam based men’s underwear brand wants to change directions in underwear advertising with a clear pay off: ‘If you’ve got balls’, and a video commercial showing a guy doing loads of crazy stuff. Just wearing his A-dam boxers.

Steven van Heyningen, founder of A-dam Underwear says: “When you think of men’s underwear, one either visualizes pale types in tight white briefs, or muscled guys drenched in oil showing off their six-packs with an overly large brand name placed on the strap of their boxershort. It’s always the same and the underwear is overpriced. ”

The three young owners Steven, Job and Steven, managed to launch the fresh new underwear brand  in a short time. They started 18 months ago and A-dam underwear is now available in more than 75 stores throughout the Netherlands. They launched their first collection in early August with a special, interactive shop-in-shop at de Bijenkorf department store in Amsterdam.

The guys are convinced that men can appreciate a boxer brand reflecting humor and self-mockery. They also consider it only logical to produce all products and packaging as environmentally friendly as possible.

Will A-dam Underwear find its way to your bf or hubby’s undie drawer? Watch the amusing and witty video below:

Published in Fashion, In the NOW, malemadnessmonday and News