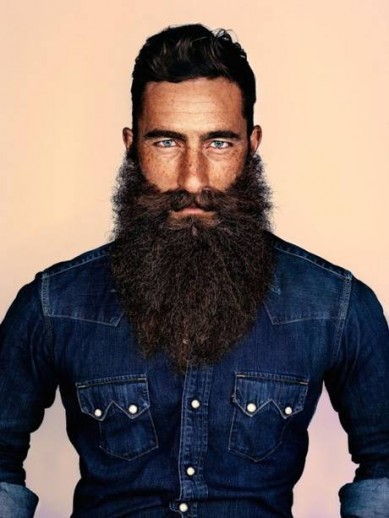 Call it a hype or whatever you like, some people are over the whole beard-thing, but we’re not over it just yet…If you’re not either you’ll certainly want to check out this expo.

Somerset House in London celebrates the ‘beard’. With a series of 80 photographs displaying this distinctive growth of facial hair.

It all began as a charity project for photographer Brock Elbank when teaming up with his buddy Jimmy Niggles to raise awareness for skin cancer in Australia through persuading men to grow beards. With his #Project60 during ‘Beard Season’ (an equivalent for Movember which raises awareness for prostate cancer through growing mustaches) he already gathered 60 portraits and then Somerset commissioned him to shoot some more bearded types exclusively for the exhibition.

“Beards are very in vogue at the moment but when I took the first photo that will be in this exhibition, of my friend Miles Better who is a tattooist in Soho, it was 2004 and beards weren’t fashionable,” Elbank told The Guardian. “I don’t really want to use the word hipster in relation to this exhibition because that’s not what it’s about – this all began because of a charity and to raise awareness of melanoma, it wasn’t about making a fashion statement. This is not just jumping on the fashion bandwagon, it is simply an angle, an interesting set of subjects for my photos.”

BEARD launched on March 3 and is open until March 29 at the Somerset House Terrace Rooms. Go, go, go!!

Published in malemadnessmonday and Photography