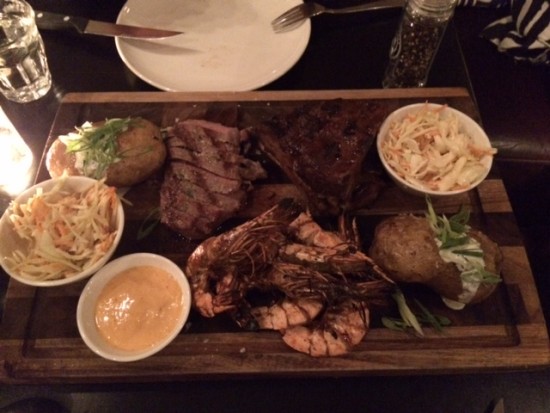 Chef Julius Jaspers appears as a regular in the culinary TV shows on Dutch television. He is the co-host of Top Chef, but most of all a food fanatic chef, cookbook writer and restaurant owner. His venue, Julius Bar&Grill, opened merely a year ago and is settled in the former Brasserie Witteveen.

The decoration hasn’t changed that much since we’ve been here, except for a BBQ island with two grills in the middle of the restaurant. Because Julius Bar & Grill is a BBQ restaurant. The food is prepared on the specific ‘open fire’ grills or in the Big Green Eggs. So expect loads of meat, or what we ended up having: surf ‘n turf.

It’s a good place for people who like no nonsense food. To have an idea of the different servings on the menu, the kind restaurant manager proposed us shared dining. Always a smart idea for a restaurant to present their signature dishes, but it made me happy as well since I always have trouble choosing.

The different dishes were served on a wooden board (plancha), and the starter consisted of Vietnamese pork belly, pulled pork on a leaf of Romaine lettuce and marinated chicken skewers and some slices of pickled cucumber. This was just the ‘turf’. We also had ‘surf’: home smoked salmon with mango chutney and dices of pomelo grapefruit (has a sweeter taste) and frisée salad. 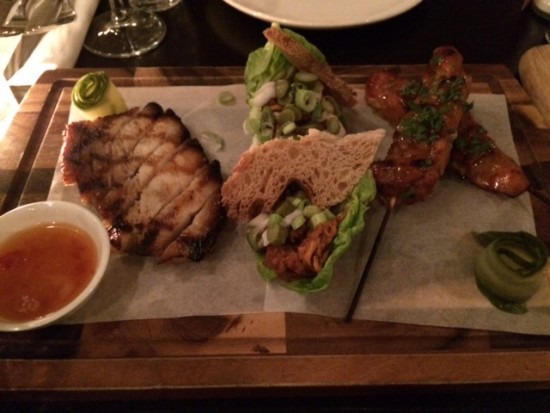 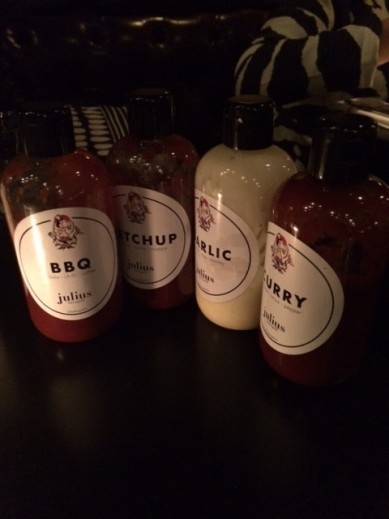 Pork belly is an undervalued piece of meat, and it was deliciously prepared with a hint of Asian spices. Pulled pork is comparable to rillettes, yet a little less greasy, and these were also well seasoned. The chicken skewers had a perfect cuisson, which is always a challenge with chicken on the bbq as it either turns out slightly uncooked or burnt/dried out.

The saltiness of the home smoked salmon was balanced with the sweet/sour chutney and the soft taste of the pomelo. I am not a fan of frisée salad as it tastes bitter, so that was left on the plancha as remaining decoration.

As an in between appetizer we had steamed oysters with black bean sauce. Probably a better quality oysters (they were also correctly served on a bed of ice) than we get at Nam Kee -famed for the black bean oysters- yet, I have to admit that the sauce was a bit too salty for my taste, and as a comparison, the ones from Nam Kee are actually quite good. 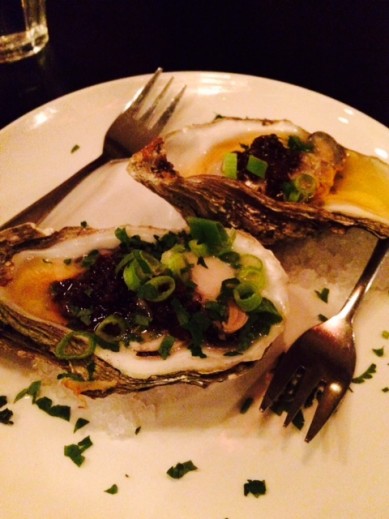 Next came the main courses: Grilled and sliced Aberdeen Angus Entrcôte, Asian Spare Ribs and Black Tiger Prawns with chili mayonnaise. These were served with coleslaw, a baked potatoe and triple cooked fries. Accompanying every dish are the homemade BBQ sauces, packaged as if they were beauty products! They can also be purchased to take home with you. There are four different flavours: Ketchup, Curry, BBQ and Garlic (the ketchup with a subtle smokey hint is our favourite).
The entrecôte was the least popular on our plancha. Well prepared but it lacked some flavour (some pepper maybe?). The spare ribs on the other hand were finger licking good, and we didn’t even have to use our hands to eat them as the meat came off the bone without any effort.

Already quite satisfied with the amount of food enjoyed so far, the dessert awaited. Same concept: 4 different desserts to taste and share. Chocolate mousse, cherry/yoghurt ice cream on almond praliné, a pear and almond tarte and a tropical syllabub of grilled pineapple with a coconut/lime cream. A perfect combination of tastes and textures to conclude a copious dinner. 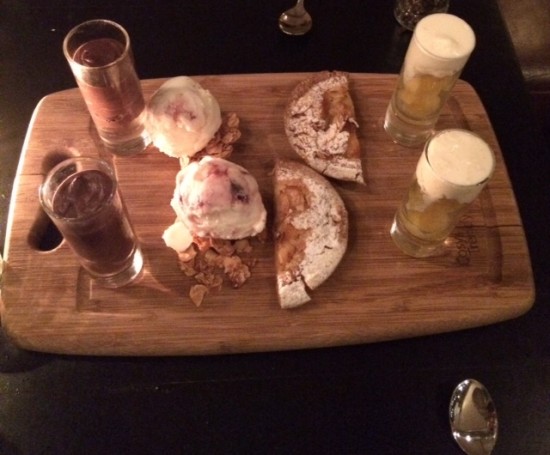 Since we knew we would have meat as a dominant ingredient, we choose a red wine to pair the dishes. The Cal y Cantro Tinto is a Spanish ruby red wine from the Tierra de Castilla with a full flavour but a bit of a dry aftertaste. I would suggest to take a red wine which is more supple on the palate. 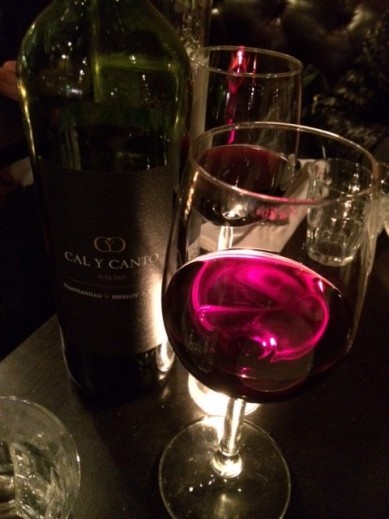 Overall conclusion: great meat, friendly service, and the sturdy interior with the long Chesterfield couch offers the perfect setting for a dinner with your guy. We bet he’ll love it! Do keep in mind that the tables set on each side of the walls are quite close to each other which can result in interaction with your neighboring table. This might not be suitable for those looking for an intimate dinner. (Though we had a really nice chat with our neighbors!)

All images © The Digitalistas except for the last three, courtesy of IQ Creative. 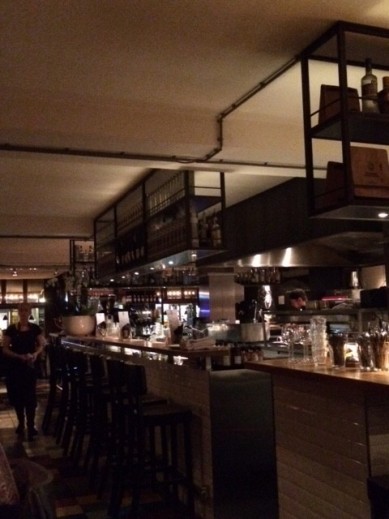 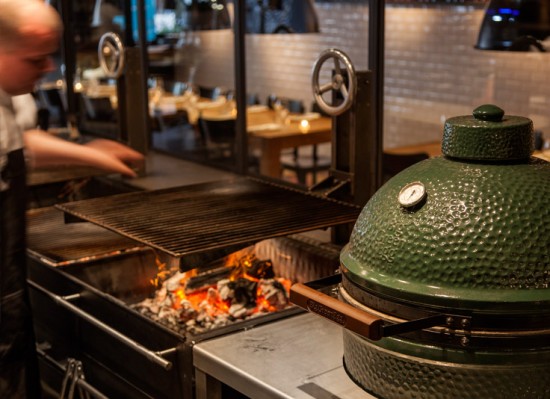 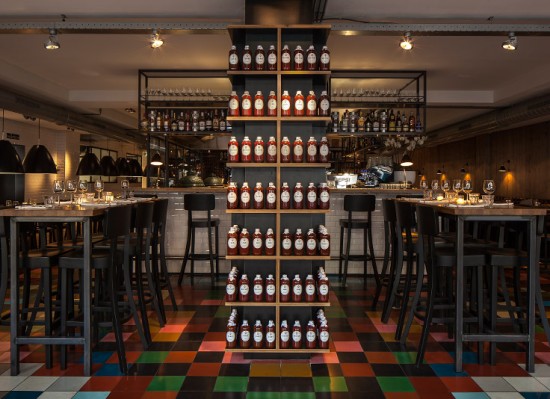 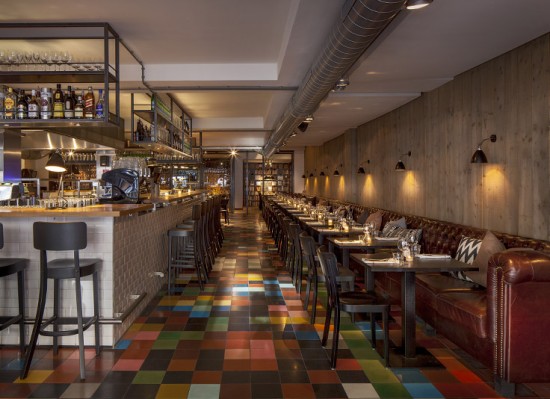