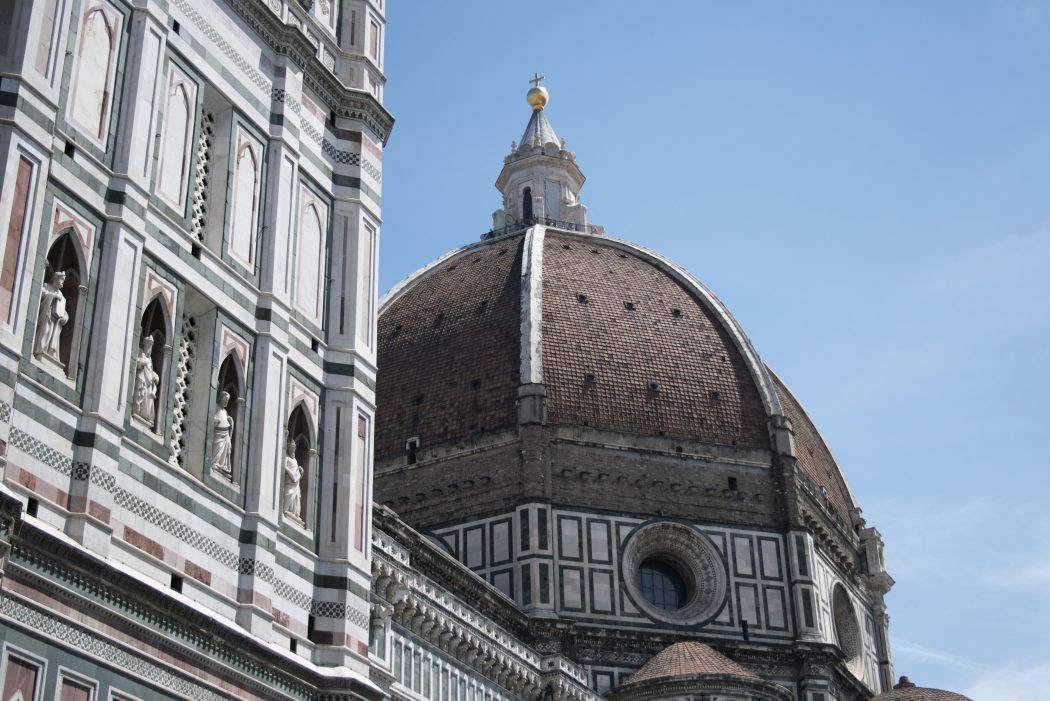 Under The Tuscan Sun: Day 3

There are still many cities for me to visit in Italy, though I believe Florence would end up in the top 3. It gathers history, art, fashion and authentic charm. Plus it is heaven for foodies!

‘Firenze’, as it is named in Italian, is the capital of the Tuscany region. I have visited Florence several times before but never really ‘toured’ the historical highlights, so that was a first.

It was one of the most influential and wealthiest cities in the Middle Ages, considered the birthplace of the Renaissance and attracts millions of tourists every year. Florence inspired (and still inspires) many, as prove the numerous monuments, museums and art galleries.

Famed writer Dan Brown chose the beautiful city as a stage for his book ‘Inferno’. Coincidentally our first guided tour was based on highlights from the book, and took us to the Palazzo Vecchio and the Duomo. Amazing architecture, fresco’s and what not; a true display of affluence powered by the Medici family.

The advantage of a guided tour is that we didn’t have to queue and in the second tour we’ve visited the Ufizzi gallery and had access to the Vasiri Corridor (housed in the Ponte Vecchio). I have to admit I am not a huge fan of visiting museums and such with a group. Guides tend to spend too much time talking (which isn’t necessarily a bad thing for the philistines among us), but with 30 degrees outside, plus a tourist packed venue, it is more exhausting than inspiring. That’s just on a personal note because I have seen enough art and museums in my youth and later during my fashion studies. I guess I just had an overload…I’d rather go explore hidden gems with a local.

Luckily the cultural activities were alternated with a lovely lunch, some relaxation on a terrace, hunting for gelato’s and a concluding dinner. Here are some tips we gathered:

Osteria dei Buongustai
Tucked away in a side street of the Piazza della Signoria, you enter a narrow lunch cafe. You can take away, have a quick bite at the entranceway table, or settle in the back. Expect simple but good, traditional home cooked food for an affordable price (ranging between €5 to €10, make sure you can pay cash). I feasted on truffle spaghetti, chicken liver crostini, grilled vegetables and a tiramisu. Buonissimo!
It is busiest between 1 and 1.30 pm, so try to have either an early or late lunch avoiding the rush hours. 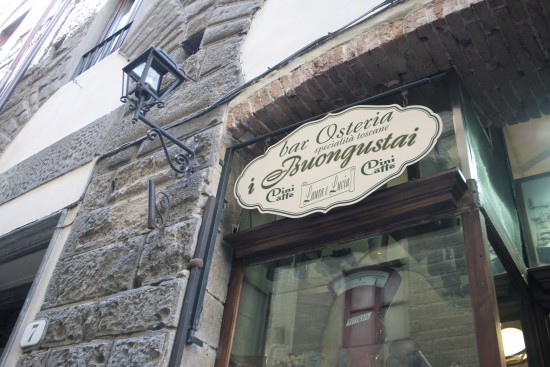 GILLI
A total opposite of the above, GILLI is an elegant Florentine venue. This grand cafe/tearoom is over 200 years old, foremost known for its creamiest capuccino’s and exquisite pastry, and also one of the popular aperitivo hangouts during Pitti Uomo.
A majestic cornered bar, frescoed ceilings, murano lamps…the works. But what I love most is the terrace on the Plaza della Repubblica.

Hotel Brunelleschi
During the Inferno tour, we walked pass by the Brunelleschi hotel. Located in the heart of the city, only 50 meters from the Duomo. It includes the Pagliazza tower, the oldest building still standing in the historical centre. It dates back to between the 6th and 7th centuries, and was even used as a woman’s prison in the 12th century.
Dan Brown’s main character in the Da Vinci Code and Inferno -Robert Langdon- stays at the Brunelleschi, according to which the 4 star hotel offers a special ‘Inferno experience’. Their Pagliazza suite offers an amazing 360° view of some of Florence’s masterpieces such as the dome of the cathedral, the bell tower by Giotto as well as the 13th century tower by Ghiberti of the Palazzo Vecchio.

Vivoli
The girls were on a quest to find a gelateria that was recommended to them by a friend. We couldn’t find it right away, went back and forth through some streets, but got there eventually. It is said to serve the best gelato in town since 1930. You don’t order your ice cream directly at the bar but go to the cashier where you can choose a coppa (cup) or a cono (cone). The trick is to get yourself the smallest coppa and squeeze in as many flavours as possible since you don’t pay per scoop but for the size of the coppa. I was still saturated by our copious lunch so I just tasted a small coppa of melon sorbet for some refreshment.

Gelateria Edoardo
Brand new and serving artisanal, organic ice cream. Too bad we already had gelato because I really would have sampled one of these… their cones are even made by hand!
The cool vintage interior is actually what appealed to me first; a counter with old drawers, a vintage cash register, carapina ice cream boxes, the light bulbs, and old dairy cans as decorative props.

Il Bufalo Tripone – Wine Bar and Paninoteca
/On our way for diner we (Lindsey, Bo and I) stumbled upon this small deli, one of these hidden gems. Not far from the Duomo, yet not touristy at all.
Olive oils, jams, spices and condiments, truffles, cantuccini, wines, grappa…you name it. The walls are crammed with Tuscan products. There’s a small table where only a few people can be seated to do a tasting, and at the counter they’ll make you panini’s with delicious prosciuttos, wild boar salami or cheeses. They also have these cute mini flavored olive oils and Chianti wines which are perfect to take home as a gift.

Aqua al 2
A restaurant which has affiliates in the US attracts a certain crowd (read: young American girls on their post-high school ‘let’s explore Europe’-trip) so I was a little skeptical at first.
The menu offers ‘samples’ and plain dishes, so it’s up to you wether you feel adventurous. Some of us took the pasta samples and we weren’t very impressed. The main courses made up for that, especially the Filetto al Mirtillo (filet mignon topped with a blueberry sauce) – their signature dish- and the Tagliata ai Funghi Porcini (sliced beef served with porcini mushrooms in a focaccia). There wasn’t a big choice in fish, but my Carpaccio di Pesce Spada (smoked swordfish) was fresh and tasty.

It was a long and warm day in Firenze and the driver picked us up to go back to the Fattoria, so no nocturnal browsing around town. The next day Pisa was on the program on our way back to the airport. Stay tuned to read all about that in the last ‘Under The Tuscan Sun’ article.

Feeling cultural or drooling over your key board already courtesy of our foodie tips? Take a look at the JUST AWAY offers and treat yourself on some Florentine hospitality.

Published in ALL ARTICLES, Europe, Hotspots, Inspiration, Lifestyle and Travel