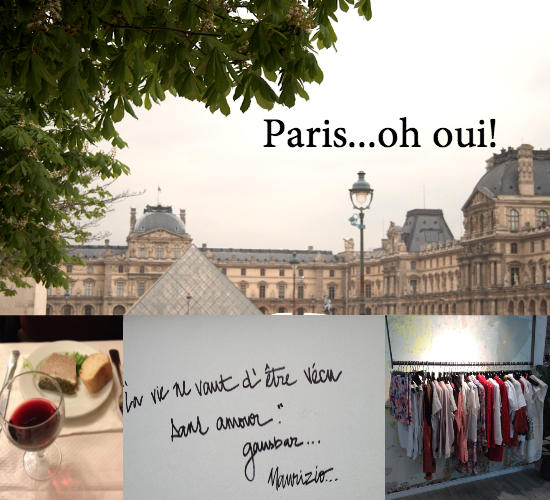 Paris my love! We can never visit this city too often. There are always new and different things to discover and experience in the French capital. For this trip we chose the local and budget angle.

There are several ways to get to Paris; by car, by plane, by train. We’ve tried them all, and believe us, nothing beats standing in the centre of Paris within 3,5 hours from door to door. So the train wins the game. By far! 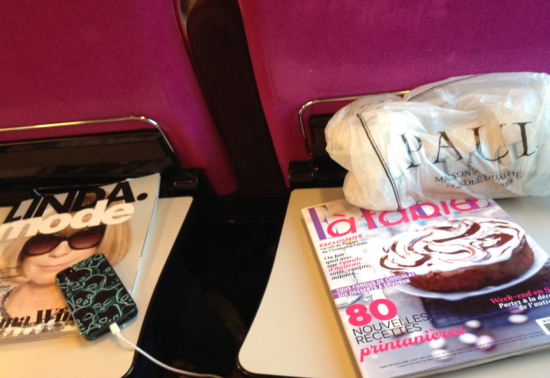 Some might say that going by train is expensive but that’s not true. It all depends on timing and organization. Don’t forget that the airport is at least half an hour from the centre of Paris. If your plane leaves close to rush hours it’s not going to be a joy trying to catch it on time…
The down side of going by car is the hazardous traffic, the hefty parking costs (let alone finding a spot), and the extra time it takes to travel. Okay, we think we’ve convinced you now, right?

Once you’ve arrived at Gare du Nord, just go directly to the subway station, buy yourself a Paris Visite card -which enables you to travel around the city within the périphérie and by different means of transport- take the underground closest to your destination and start experiencing your stay as a local.

Our Paris local and budget recommendations (or how we’ve spent 72 hours):
Where to stay? The ideal way to do so is by staying in an apartment, owned by a real Parisian. We found the loveliest ‘home away from home’ on Airbnb. Not only was it perfectly situated -between the Marais and la Bastille- it oozed everything of a Parisian lifestyle. (Read more about the apartment we’ve stayed at here).

Staying in an apartment somehow gives you a feeling of freedom and flexibility. As it is also equipped with a kitchen there is no urgent need to eat out or take a (sometimes expensive and not included) hotel breakfast.

Food! For breakfast we’d rather go to the nearest ‘boulangerie’ and grab a croissant or pain au chocolat on the go, as it saves time and money – a regular croissant shouldn’t cost you more than €1,50. Try to have your coffee/tea before you leave in the morning, as Paris is known for serving expensive coffee. We’ve noticed some huge differences between espresso and a coffee with added milk (cafe crème) for which they count the price of a latte!
Our favorite boulangerie was Du Pain et des Idées (34, rue Yves Tourdic), open daily from 6:45 am to 8 pm. It’s lovely and authentic from the outside, and they offer classic products with a twist. 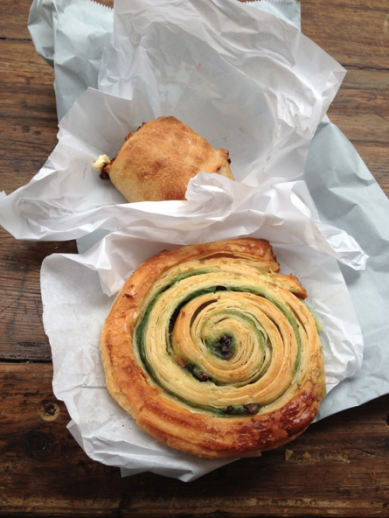 While we’re at it, the sweet tooth can ravish on the most delicious pastries. Very trendy right now are the ‘éclairs’. A classic French tidbit of puff pastry with a filling and a glaze, now revisited by L’Éclair de Génie (14, rue Pavée) or L’Atelier de l’Éclair (16, rue Bachaumont). 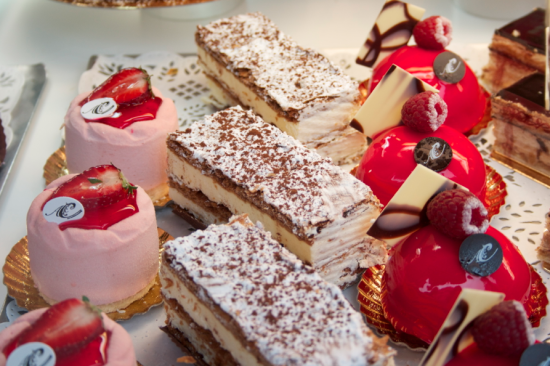 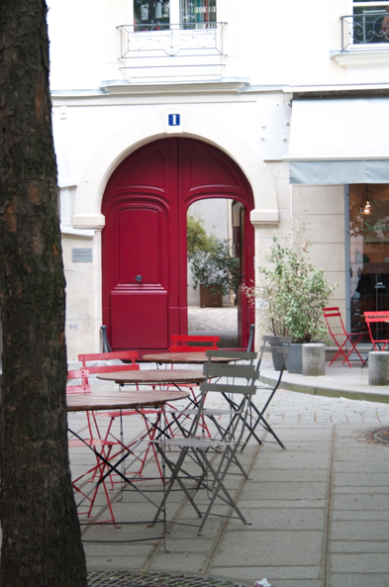 The French have their very own traditions when it comes to lunch. Rarely will you see a Parisian with a sandwich in his hand (unless it’s at 4 o’clock, and then it is more of a snack). Lunch is taken at a venue, and in order to keep it on budget, opt for a bistro/lunch restaurant and check the ‘Formule Déjeuner’ on the charcoal board outside. Big chance you’ll have a two- or three course lunch for no more than €15!
On Friday we enjoyed our lunch at Café Étienne Marcel (64, rue Tiquetonne). A tad more upscale than a regular bistro or brasserie, as it is part of the Beaumarly/Costes group, but the funky decoration makes it worth the visit. 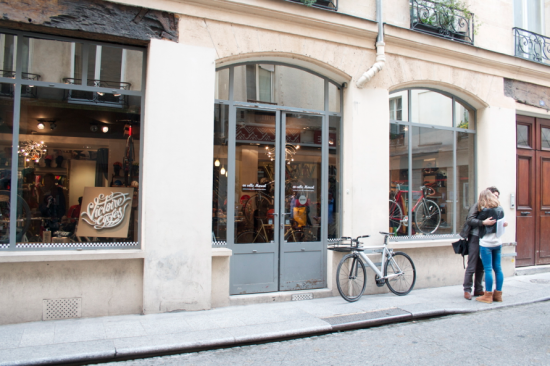 The well known and much exercised trick for having drinks without going bankrupt; the Happy Hour. Yes, in Paris too. Usually around 5 or 6 pm, and you’ll have more luck in cafés frequented by students (the rue de Lappe in Bastille is a good one). If you’d rather do that at a hotspot, go and have a look at Asian bistro John Weng (20, rue du Faubourg Poisonnière) They have Happy Hour and a killer house cocktail -‘the Japanese samba’ – with saké, vodka, kiwi and sugar cane. 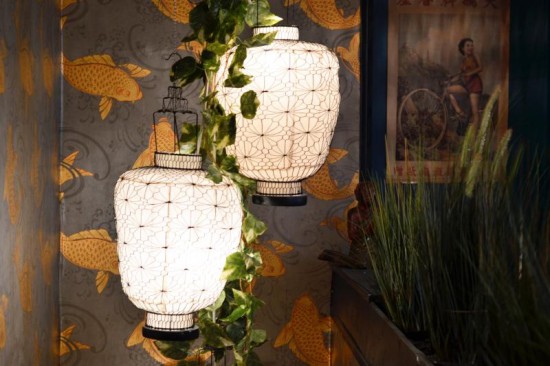 Once you’ve done that, you could stay in for dinner. Even the smallest neighborhood supermarkets are very well stocked, hence there’s a gourmet meal awaiting.
But if you feel the need to indulge in typical French cuisine for a bargain, we suggest Bouillon Chartier (7, rue du Faubourg Montmartre). Some might consider it a bit touristy, but this over a hundred years old brasserie serves fairly good and reasonably priced food (three course dinner including wine at €60 for two? Yes, you’ve heard that right).

Voulez-vous danser avec moi? To go clubbing in Paris it’s good to take tips from the locals. They will tell you about the MUST GO venues. That’s how we’ve ended up in Le Baron (6, avenue Marceau). This former hooker house didn’t loose much of its feathers along the road; red plush, sweaty dancefloor and a tiny bar. Elements that lure in the hipster Parisians. An other establishment ‘du moment’ is Le Silencio (142, rue Montmartre).
This private member’s club -but accessible to anyone after midnight- is owned and created by David Lynch, and inspired by a very strange venue from his movie Mulholland Drive. As the master himself told The Guardian about the project: “I have the feeling that I have coaxed out some of the atmosphere and the characters from my films, and even from my music.” 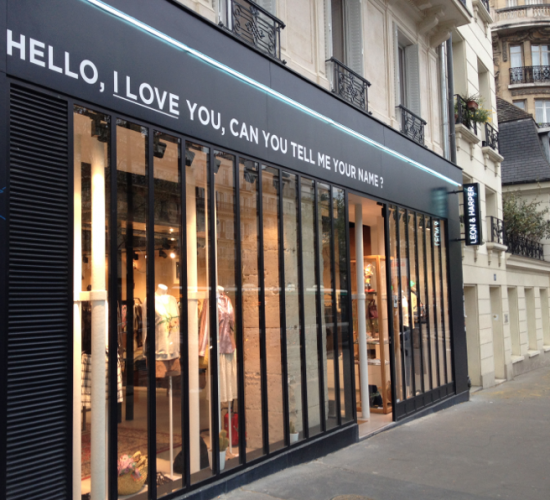 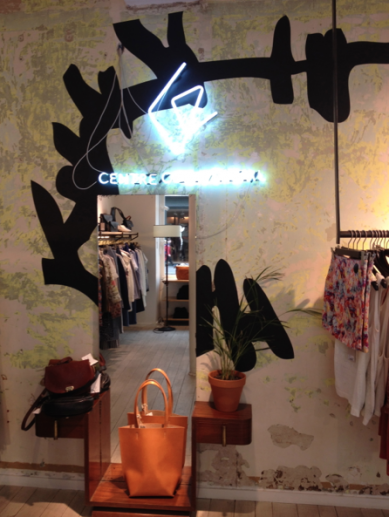 Paris style
The style of the Parisiennes is much debated. In the positive sense. They manage to merge chic and nonchalance -better known as ‘je ne sais quoi’- in their daily looks. It’s not all that complicated. You just need to know where to find the right brands, and mix these up in your own unique way. Sometimes adding a touch of vintage. And yes, you can do that in a sensible way, without breaking the bank. A well kept secret are the ‘stock’ shops from popular French labels. You’ll find three of them in one street; Maje, Claudie Pierlot, Les Petites (4, 6 and 11, rue de Marseille) Nice detail: 50%-70% on last season’s collection and they’re open until 7:30 pm on Sunday too! Find more stock shops of coveted Frenchie brands on this handy map. In the same area you’ll also find a concept store: Centre Commercial (2, rue de Marseille) –plus an affiliate for the kids (22, rue Yves Toudic) – Renhsen boutique (22, rue Beaurepaire) where -except from their main denim label Renhsen- they sell other cool labels such as Laurence Dolligé and Polder.

For a touch of vintage you can make a stop at: Kiliwatch (64, rue Tiquetonne), Hippy Market or stroll around the Puces de StOuen. Though the latter has more to offer for antique collectors or (re)decoration purposes rather than clothing. But while you’re there go and have a look at one of Phillipe Starck’s restaurants: Ma Cocotte (106, Rue des Rosiers -St Ouen). 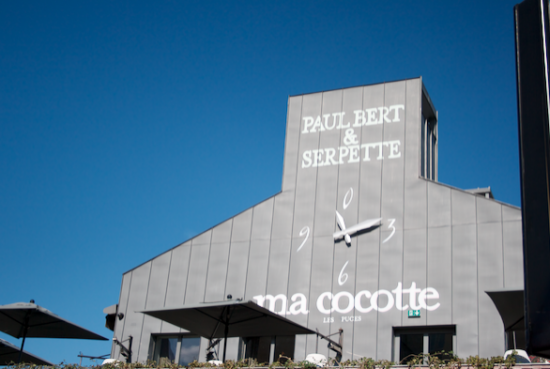 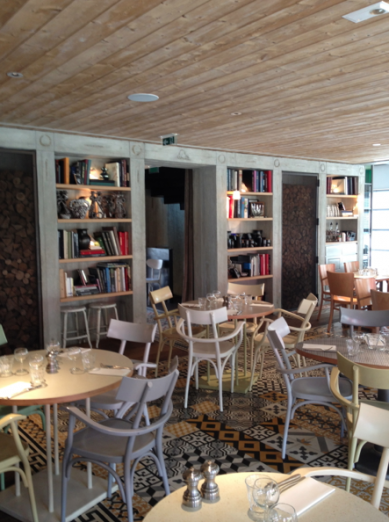 Our best kept vintage secret is the Salon du Vintage at L’Espace des Blancs Manteaux (48, rue Vieille du Temple) in the Marais. It’s only twice a year but guaranteed for (designer) vintage treasures.

What about the cultural stuff?!
Paris and culture is a match made in heaven. Countless museums, galeries and creative spaces welcome you with open arms. Some of them even have free entrance. Always look at which exhibition is on at Le Musée Des Arts Décoratifs (107, rue de Rivoli), an affiliate of the Louvre. It has the most amazing presentations of renowned designers. We’ve visited the Dries van Noten exhibition (until August 31st), a must-see if you have the chance.
You also might have heard of Wanderlust, part of the Cité de la Mode et du Design (34, Quai D’Austerlitz), settled on the docks overlooking the Seine and where a wide range of cultural activities are gathered. There is a huge roof terrace (Le Moon Roof) where Parisian creatives go chillin’ on a sunny day.

Because 3 days was still way too short to see all we had on our list, we hereby serve you some tips from our locals:

All images © The Digitalistas. This trip was powered by Neckermann.nl and Airbnb.