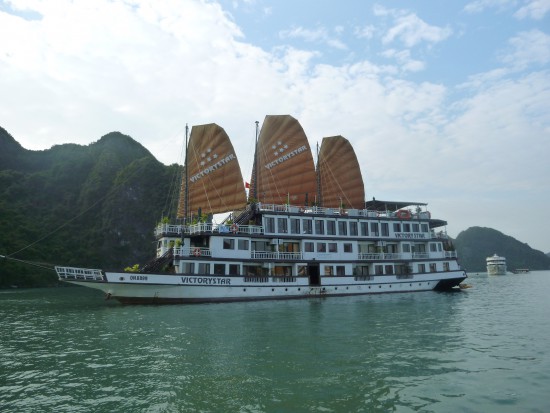 Voted the number one tourist attraction in Vietnam, Halong Bay is a spectacular scene of 2,000 limestone islands rising from the Gulf of Tonkin. Designated a UNESCO World Heritage site, the bay is nothing short of spectacular – with 1553 square kilometers of hidden grottoes, caves and lush greenery. 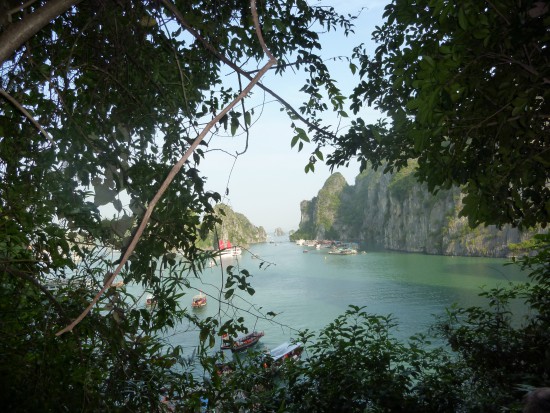 In Vietnamese, Halong Bay translates to “where the dragon descends into the sea,” based on an ancient legend in which the islands were created by a dragon. The best way to see the bay is by boat – and while there are plenty of options, you have to be careful which you choose. After much research, we booked a three day, two night tour with Victory Star, a subsidiary of the Bai Tho Tourist Transportation Co.

The company arranged an early morning pick-up in Hanoi, a (bumpy) four hour drive away. Around noon we boarded the spectacular “junk” boat, decorated with beautiful tropical woods and Vietnamese art. Despite being on a boat, the rooms are like any four star hotel, with a large bed, option for a balcony, and full bathroom (our stunning Presidential Suite also came with a Jacuzzi tub!) 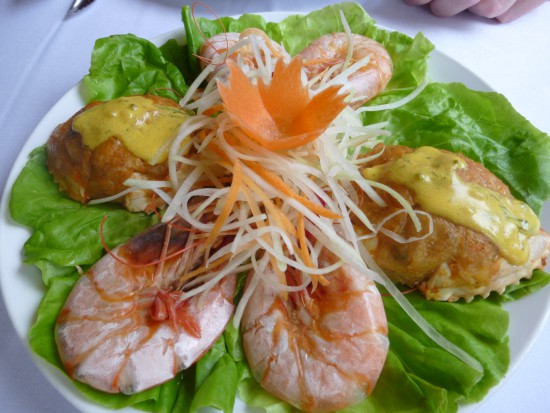 As the boat departed from the mainland, we enjoyed our first of many delicious meals on the water. The food on the Victory Star cruise was exceptional, mixing traditional Vietnamese cuisine with beautiful presentation and Western touches. 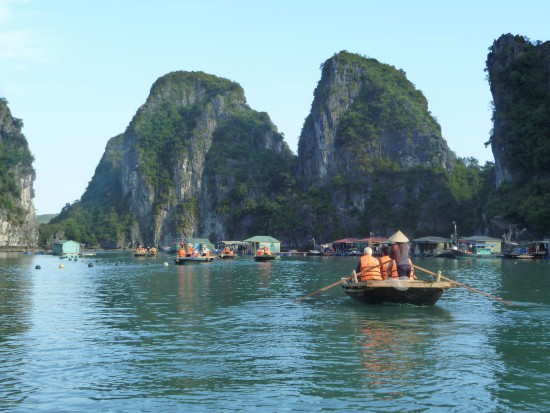 The three day tour was organized with a great mix of activities and relaxation time. After reading up about the various tours, we were so happy we booked a three day, two night tour; otherwise, you have less than 24 hours in the bay, which for us was not enough time to get a full impression of the area. 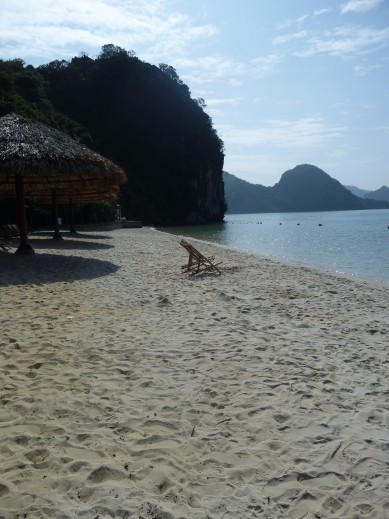 On the first day we visited Vung Vieng, a floating fishing village inhabited by about 300 people (or 50 families), which have lived here for generations. We disembarked the large boat for small rowing boats, which paddled us around to see the floating homes, schoolhouse and community centre. Afterwards, we had the option to swim or kayak before cocktails and dinner. 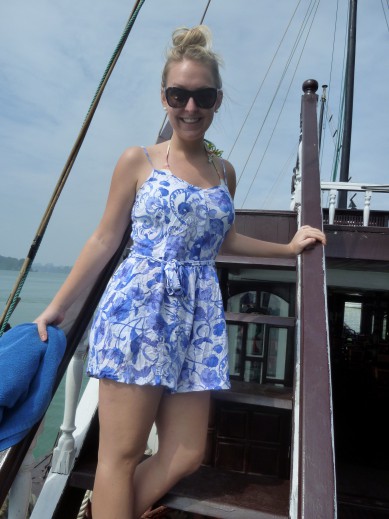 Our second day began with sunrise tai chi classes on the deck, followed by a light breakfast. We then stopped at Sung Sot Cave, a giant grotto that’s accessible via 146 steps, or 25 meters above sea level. The cave is gigantic, spanning about 10,000 square meters, with thousands of stalactites and stalagmites; it took about an hour to tour the massive space. Afterwards, passengers on the two day, one night tour were already brought back to shore – but the best was yet to come!

We were brought on a small, private yacht for the afternoon, where we were taken to the private Soi Sim Island for a few hours, where we lounged on the beach and hiked the island’s hill for a stunning view of the bay. We then went swimming, fished with the crew on deck (even caught our own lunch!) and kayaked around monkey caves. It was a very memorable day and one of the highlights of our entire trip.

On the third morning we were taken to the smaller Luon Cave, which in the centre had a small lake surrounded by high stone walls. The cave is known for its monkey population and we did see a whole clan munching on bananas!

The Victory Star tour ended around 11 in the morning, at which point we were taken back to the mainland. During the entire tour, crew members and wait staff took great care for the guests. The entire tour was coordinated flawlessly, with seamless flow from one place to another. 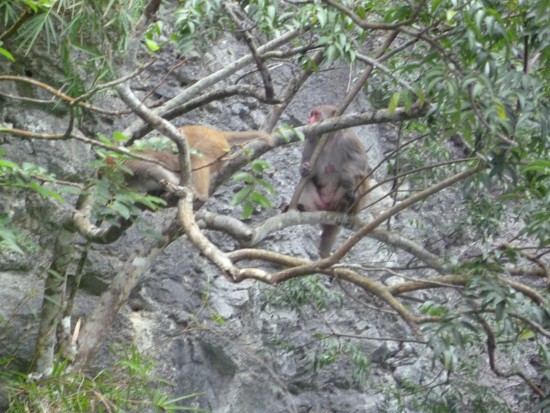 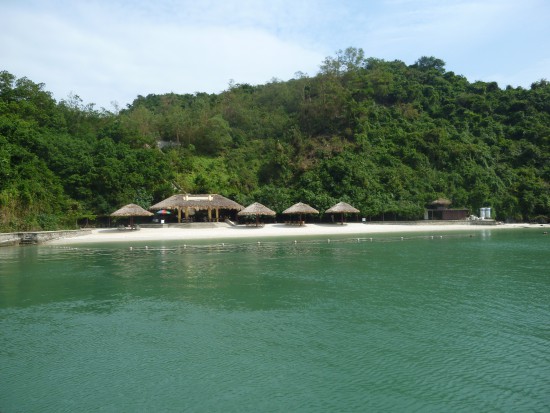 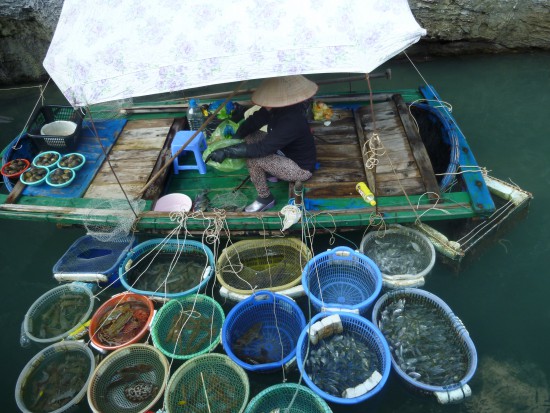 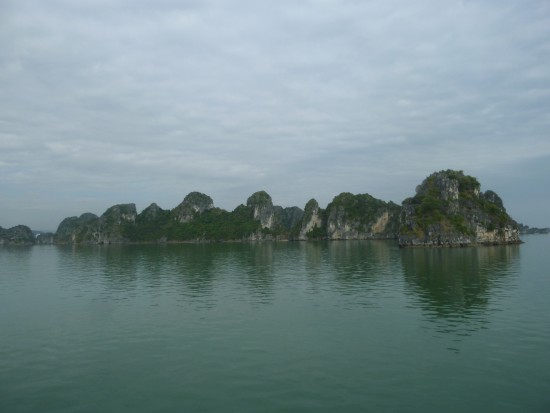