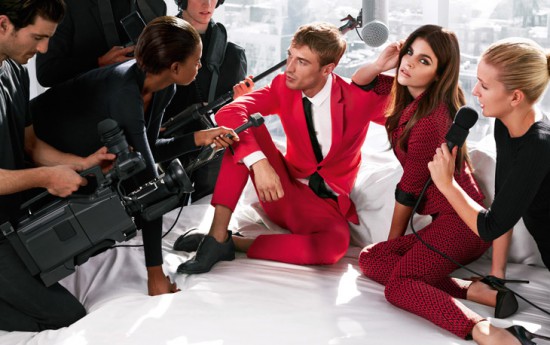 This is not another ordinary campaign for a label, but one with a twist. It plays with the power of media and privacy today, reserving an interactive participation for the viewer.

Two ‘fictional’ celebrity couples are the main characters in this Sisley S/S 14 campaign and played by model and Art Director Julia Restoin-Roitfeld, French model Clément Chabernaud, American model Lindsey Wixson and  the Australian model Rueben Ramacher. They embody the elegant, the sexy, the modern, the unconventional, the cool…the world of Sisley. Staging situations celebrities often come across, the campaign is stylized in realistic interview settings with references to the famous Amsterdam Hilton bed-in from John Lennon and Yoko Ono.
Argentinian photographer Sebastien Faena captured the ‘fake’ famed couples. He has also worked with Carine Roitfeld on the CR Fashion Book.

The campaign, launched on January 16, offers a video within the video featuring backstage imagery, the model’s favorite items from the collection, and an interactive experience; part video game, part multimedia story. Visitors can move around the room of the New York penthouse where the photo shoot took place, while browsing the garments worn by the models. All items are directly available in the shop.
The idea follows the previous campaign where imagery from the shoot with Georgia May Jagger could be discovered through the label’s social media platforms.