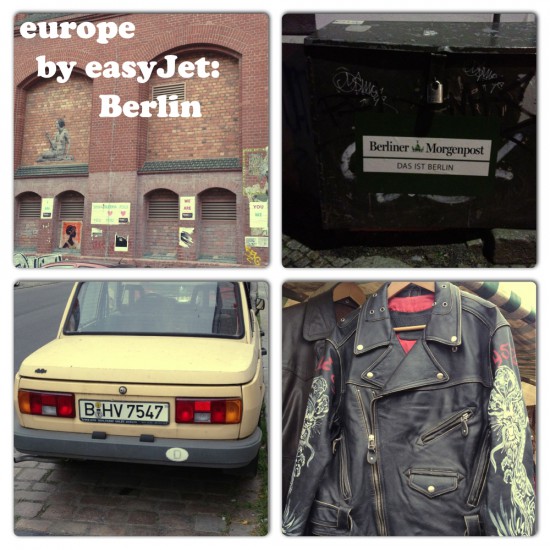 Each month we bring you tips for a budget city trip with easyJet. This month’s trip led us to the creative and funky capital of Germany: Berlin.

Berlin holds a steady place amongst the most popular ‘cities to visit’ in Europe, and it has a lot to do with the relaxed and positive vibe of the city and its population. Maybe that it’s due to Berlin’s decades long division of East and West. Just a glimpse at the remains of ’the wall’ reminds the inhabitants of the reunification and a renewed sense of freedom, which results in a lot of creativity and entrepreneurship.

The capital of Germany has a population of 3,3 million. And yet, besides being a huge city, the different districts seem to be villages on themselves with each their own athmosphere. Areas within the districts are often referred to as ‘Kiez’.
Certain areas are in favor with the young and hip, such as Mitte, Kreuzberg and Friedrichshain. And we couldn’t agree more if you aim for a weekend of ‘fun on a budget’.

It wasn’t the first time we’ve visited Berlin, but that actually made us explore the city through different angles. And we went hedonistic on this trip: shopping, food, nightlife! So no Checkpoint Charlie, Brandenburger Tor or Reichstag…We’ve visited locations bearing names as Club die Visionär,  Watergate and Kater Holzig. A whole different range of landmarks, or should we say ‘nightmarks’?

Our Berlin recommendations (or how we spent 36 hours):
Sleep: We stayed at the lovely Monbijou hotel (Monbijou Platz 34) in the Mitte district. In French ‘mon bijou’ means ‘my treasure’, and though it’s named after the intersection it’s located at -Monbijou Platz- this boutique hotel is an absolute treasure!
Other suggestions for your stay could be the Michelberger Hotel (Warschauer Sraße 39/40) – which is a totally different experience, and situated in the Kreuzberg-Friedrichshain district. Also nice are the Art’Otel Berlin Mitte (Wallstraße 70/73) filled with art from renowned German artists -such as Georg Baselitz- which is close to the Museum Viertel and historic highlights, or the Nhow Berlin (Stralauer Allee 3).We stayed at the Nhow in Milan, which was great already, and this one is also amazing! It has music as an overall theme.
Eat: In Berlin they’re quite into biological food, and you’ll find good vegatarian and vegan restaurants. We had lunch at the new and happening vegan venue Kopps (Linienstraße 94), where my addiction to rhubarb juice proceeded (when I was in Berlin last year I discovered the rhubarb-wodka cocktail…yummm).
Somehow I always end up eating Asian food anywhere I go, so we also had some Korean food at YamYam (Alte Schönhauser Straße 6), and a Bento Box at Japanese restaurant Hashi (Rosenthaler Straße 63). Other nice Asian hotspots in this area are Chén Chè (Rosenthaler Straße 13) – a totally zen and authentic teahouse slash Northern-Vietnamese restaurant- and equally known for tasty Vietnamese dishes is Monsieur Vuong (Alte Schönhauser Straße 49). Their menu changes every two days, so you can always try something new!
On the second evening we were lured into Al Contadino Sotto Le Stelle (Augustraße 36), after passing by its terrace several times, where the people obviously enjoying their dishes. We had a delicious risotto and lasagna. Plus, the waiters of this family restaurant are very friendly.
Having an afternoon coffee or tea is a treat in the Mitte area. Two of our favourites are: 1. Factory Girl (Auguststraße 29). Try their dairy specialty, the ‘Magnolia’. Beware of the portion you order, it’s a stomach filler! 2. Milch Halle (Auguststraße) for coffee, fresh fruit juices and lunch. Love the cosy black & white interior.
If you are keen on trying someting different instead of a regular dinner in a restaurant and enjoy hipster Berlin in combination with food, we definitely recommend Bite Club (Hoppetosse, Eichenstraße 4). It’s a two-weekly street food festival during the summer with a various selection of food trucks/stalls (from stuffed pies to Columbian/Venezuelan Arepas to bratwurst) held next to the vintage Hoppetosse boat. A good start before you go out and ‘parté’! Check the website for more information and dates.
Going out: On my previous visit to Berlin I said to myself: ‘Next time I have to experience its nightlife to the fullest.’ And so I did. 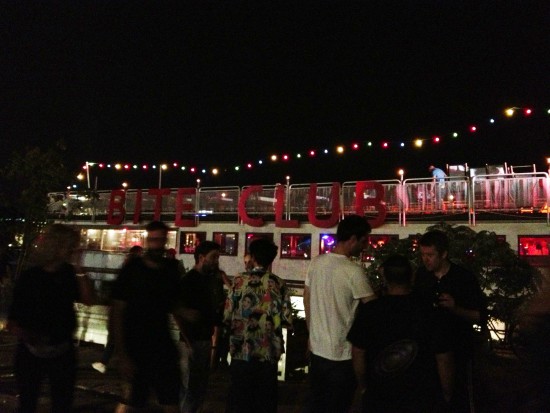 Since Bite Club was a 5 mins walk from Club Visionär (Am Flugtraben 1-it closes at the end of Summer, entrance fee €5), this was the first stop on Friday night. It’s not as much of a club as the name says, but more something like layered terraces where people can drink and chill at the edge of the Spree. After this pre-party stop we did like most Berliners do, and made a pit-stop at the nearest gas station to buy some beer (you are allowed to walk around the streets with a bottle of beer in your hand). After a firm walk (we were a bit lost), we ended up at Watergate (Falckensteinstraße 49 – Entrance fee €15, only cash!), one of the popular clubs alongside the Spree (great view).
On Saturday night the rythm of the Berliner techno beats took us to Kater Holzig (Michaelkirchstraße 23 –Entrance fee €12, only cash!). We can’t even begin to describe this venue (partially open air). It’s such a good example of Berlin’s creative and underground nightlife vibe. Like ending up in a crazy circus full of party people. You could almost get lost in this labyrinth of curiosities.
The absolute icing on the ‘party’ cake according to our Berlin insiders -are Zur Wilde Renate (Alt Stralau 70) and Berghain (Am Wriezener Bahnhof). Berghain was actually on top of our list, but there’s just so much you can do in 36 hours…as the best time to visit this club to avoid tourists and queues is on Sunday after breakfast. For sure that we’ll be back for a ‘clubbing-only-weekend’.

Shopping: Being a capital, Berlin has enough to offer when it involves shopping. From the big and famous retailers to thriftstores, this is your town. Yet, we felt like sticking to the Mitte area, as you’ll find cute boutiques and some real Berlin brands. Especially the Mulackstraße and Alte Schönhauser Straße represent some of Berlin’s finest. Here are a few must-go shops:
Lala Berlin (Mulackstraße 7): Once I fell in love with a cashmere scarf from Lala Berlin and that’s how I became familiar with the Berlin label, founded by former MTV editor Layla Piedayesh.  Their shop isn’t very big, but has a various collection of printed silk items and knitwear. They sell pieces from some nice jewellery labels as well.
Starstyling Berlin (Mulackstraße 4): the perfect stop if you’re up for some colors, glitters and craziness. The two brains behind the label, the couple Katja Schlegel and Kai Seifried founded Starstyling from theatre- and stage design instead of fashion design which explains the Lady Gaga-ish creations. A bit hysterical and over the top, but worth having a peek.
Wald (Alte Schönhauser Straße 32c): is a shop with the brands we love such as American Retro, Surface to Air, Muubaa and Sophie Hulme, but also Berlin- based designers, like Malaika Raiss, Karlotta Wilde or Issever Bahri and some other labels from abroad. Nice detail: they make their own magazine which you can take with you.
Kennel & Schmenger (Alte Schönhauser Straße 33/34): Fab shoe-label from a family-owned firm (Schuhmanufaktur). We had a crush on the leopard print sneakers…
Rebecca Loves (Alte Schönhauser Straße 41) for a mix of international designer labels
Schwarzhogerzeil I & II (Mulackstraße 23 & 28): The owner and founder Nicole Schwarzhogerzeil was the first to bring Isabel Marant to Germany. Other brands in the first shop are Cacharel, Eley Kishimoto, Tsumuri Chisato, Carven and Zucca. Number II proposes casual wear from more affordable labels such as Bellerose, Ba&sh, and Vanessa Bruno Athé.
Schoenhauser design (Alte Schönhauser Straße 28): for design furniture and accessories. Also great for a gift.
If you walk a bit further in direction of the Neue Schönhauser Straße, you’ll find the well known shops from Monki, Weekday, Drykorn, Karl Lagerfeld etc. Don’t forget to drop by the Weinmeisterstraße for the Urban Outfitters and the Rosenthalerstraße for Sandro, Acne but also a Sisley brandstore and H&M Divided.

On Sunday we went to the flea market in Mauer Park (Bernauer Straße 63/64). It’s a hangout for both Berliners as tourists. You have to be patient and a real bargain hunter to depict the treasures from the trash, yet, Time Out named it ‘king of the flea markets’. Fun detail is the weekly karaoke session which can attract a crowd if the singing talent shows some serious star quality.
Every Sunday from 10 am-18 pm 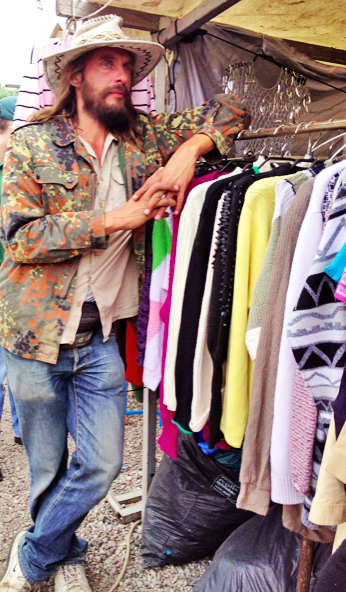 We deliberately choose to stay on the Berlin East Side because that’s where you will get a taste of the raw and trendy Berlin. In our opinion this is the most buzzing part of the city, but do keep all your options open while you visit.

What else?
-Cultural entertainment at the Hackesche Höfe/Oranienburgerstraße.
-Go see an exhibition. Berlin is packed with museums so there’s always an expo for your taste. There’s one from Helmut Newton going on at the Museum für Fotografie until October 13.
-Have a bike tour. If you’d rather do that individually, most hotels offer bikes for rent at approximately €12 per day.
–If you happen to be in Berlin in October you’re right on time for the Festival of Lights. The city already has such beautiful architecture, and now these will be lid through façade installations and projections created by numerous artists. Special cityscape tours will be available by bus, bicycle, taxi or boat. Until October 20th.
-Once again, for the hedonists, partygoers, clublovers, the name is BerMuDa (short for Berlin Music Days). From November 6 to 10, come and celebrate Berlin’s club culture.
-New Year’s Eve at Brandenburger Gate seems to be quite awesome…

Practical information:
easyJet has 7 daily flights from Amsterdam Schiphol Airport to Berlin Schoenefeld. Tickets start at €39,45 p.p (single ticket incl. taxes and additional fees)
From Schoenefeld Airport we took the train (S-bahn, Airport Express, costs €3,20 for a single ticket. Buy them from the vending machine at the airport to avoid the queue at the train station. You can reach the station by foot. When you walk out of the airport go left and follow the signs. NOTE: Don’t forget to validate your ticket in the stamping machine on the platform). It takes you to Alexanderplatz in just 25 minutes, where you can catch the U-bahn, a tram or buses that will take you in any direction. We recommend you to do the same when you go back to the airport to catch your flight. The Airport Express is the quickest way.

Public transport is very good in Berlin, the U-bahn keeps on riding through the night as well, which is ideal for the clubbers. To make it as easy as it gets; buy a Berlin Welcome card for the duration of your stay for unlimited use of the public transport services and discounts on many attractions.

Berlin is an ab-so-lute must go. Especially when traveling on a budget as a lot of sightseeing is for free, as well as art and culture. A big part of the Berlin life takes place outside, and especially in Summer there are a lot of street festivals offering theatre and music (Visit Berlin is a good guide for anything you’d like to explore).
Just go with the flow and see where it takes you. You will not be disappointed. ‘Berlin ist die beste!’ As a matter of fact, we’re off booking our next trip…Tschüß!!