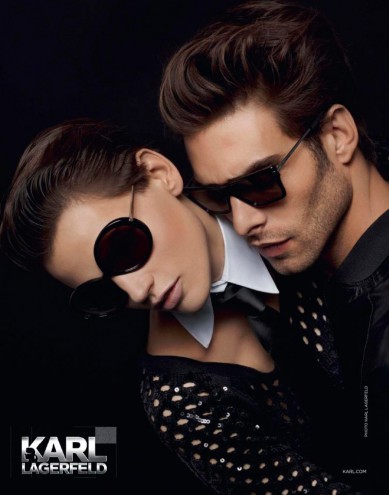 Karl Lagerfeld is known to be kind of blunt by sharing his opinion. This time he claims his new line of sunglasses: “Balance ugly faces and they make beautiful faces more beautiful.”

You can always ask yourself wether he’s serious or not as he is very good in hiding any hint of sarcasm, though when you look closely at the video when he says it, don’t you see that little naughty grin?!

We actually believe Karl makes a bit fun of himself, as his signature black specs are pretty much glued to his face.

For some wednesday morning humor, read some of Karl’s hilarious insulting quotes gathered by The Telegraph.

Again, it is Saskia de Brauw and Jon Kartajarena that feature in the latest campaign for Karl Lagerfeld eyewear, and there isn’t much ugliness to ban from their faces.

What do you think of the label‘s new collection? You’ll find the frames at the KL store in Amsterdam.

Meer laden…
This error message is only visible to WordPress admins