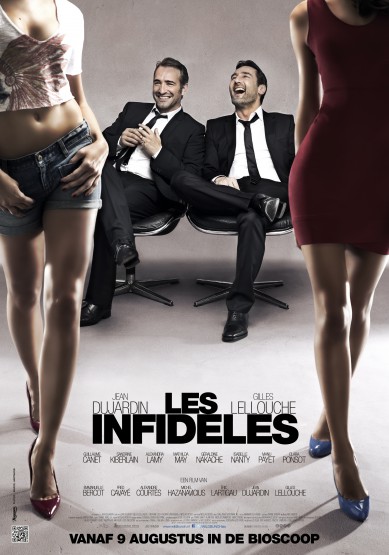 French men are said to have unfaithful tendencies. Instead of denying, Academy Award-winner Jean Dujardin (The Artist) and Gilles Lellouche prove to be very professional adulterers.

Les Infidèles is an episodic sketch consisting of 7 short films in which the actors highlight different characters who deal with adultery situations. The triumphs, failures, delights and pitiable aspects of a man’s unfaithfulness displayed with outspokenness and humor.

There is nothing specific to say about a plot, because each short story in itself contains one, it’s more about illustrating different type of men who commit (or are about to) adultery; from unscrupulous pig, to the coward, to the cunning type and everything in between.

For both leading actors the movie was a breath of fresh air. They’ve also co-directed and co-produced the project, which enabled them to channel their humor and creativity without any restriction.Their carefree play made us forget about the obvious stereotypes on the subject.