Here are some highlights and stuff to look forward- as far as these are available at the moment- in 2012:

Expo’s:
•Azzedine Alaïa at the Groninger Museum. Named the ‘sculptor’ of  fashion. The tiny Tunesian designer made great designs and has a retrospective in the Groninger Museum. It’s in the upper north of the Netherlands, but worth the trip. Until May 6, 2012
•Terence Conran: The way we live now at the Designmuseum in London until March 23
•Christian Louboutin: A retrospective of the designer, Designmuseum London from March 28 to July 1st
•Diana Vreeland, Fortuny Museum Venice (Italy), March 2012
•Louis Vuitton retrospective -Musée des Arts Décoratifs, Paris -March 6 until September 16
•Helmut Newton – Le Grand Palais, Paris – March 24 until June 17
•Damien Hirst at the Tate Modern in London from April 4 to September 9 2012.

Movies:
•Power to the women. Meryl Streep as Margareth Thatcher in The Iron Lady, to be released in January.
•Before the Sartorialist, there was Bill Cunningham. A portrait of  the 83-year old photographer who was the pioneer of the streetstyleblogs, followed on his bicycle through New York to find stylish people ‘On the Street’. As Anna Wintour says: “We all get dressed for Bill. The documentary Bill Cunningham New York is set to release in March. Watch the trailer below:

•Julia Roberts as the -very funny:”It’s not a wrinkle, just a ‘crinkle’ “- evil queen in a version of the Grimm brother’s fairytale Snow White named Mirror, Mirror.  Release in March.

•A fashion icon like her deserves a documentary. Diana Vreeland: The Eye has to Travel -which has been presented at the IDFA- will be officially released in cinemas in May.
•Daniel Craig showing off his James Bond-muscles in Skyfall, the new 007-flick directed by Sam Mendes. And Javier Bardem is said to play the bad guy? Enough ingredients if you ask us. Set to release in October.
•Ryan Gosling chasing mobsters alongside Sean Penn and Emma Stone in Gangster Squad, release November.
•Baz Luhrman’s Great Gatsby in 3D featuring Leonardo DiCaprio, release December 2012.

•Madonna is set to release a new album in March. The title is yet to be announced.
We’ll keep you posted on more album releases throughout the year, so keep checking!

Fashion:
•Fashionweek: Ready to Wear Fall-Winter ’12-’13 starts on February 9th in New York and ends March 7th in Paris. The dates for the Spring-Summer ’13 collections aren’t yet available.
•Marni for H&M available in March.
•Alice Dellal as the new face of Chanel’s ‘Boy’ bag collection. Available from March.

•Opening Ceremony founders-duo Carol Lim and Humberto Leon’s first S/S’12 collection for Kenzo.
•In the accessory-department the emphasis is on the earrings. Big, bigger, biggest. Remember what we hung in our ears in the 80’s…
For the bags, we see a revival of the Gladstone bag (or doctor’s bag if you prefer), but also wristlets, fold-overs, and micro-bags vs maxi clutches.

Beauty:
•Trends: bold feminine brows, lips in nude or bold red.
•Inspired by florals. Make-up from Lancôme, Sisley, Dior and Givenchy all have something to do with flowers. It varies from Garden parties, to orchids, to roses , to poppy flowers.

•M.A.C stays on the arty path after their Fall collection with Cindy Sherman, a Winter collection by the excentric Daphne Guiness (just released in the US but available internationally in January), taking on avant-garde designer Gareth Pugh who put gothic and futuristic influences in an unisex collection -a collaboration that continues for S/S’12, the make-up brand kicks off the new year with Iris Apfel (she’s 90 years old, beauty has no age!) as their new muse. Her capsule collection will be available from January 5th. 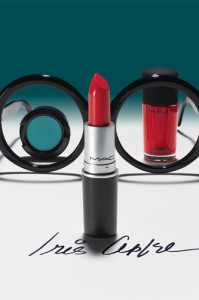 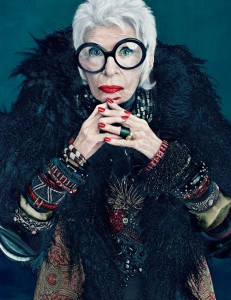 • YSL releases a line of skincare. Up to now only make-up was available from the iconic French house. In February a line of anti-ageing products will be launched.
•Many celebrities are launching their fragrances in 2012: Rihanna, Kanye West, Kim Kardashian, Heidi Klum Lady Gaga, Madonna…We can smell like who-ever we choose. But we’d rather wear less commercially exploited fragrances. Some ‘fashion related’ scents we’re curious about: Marni’s debut fragrance (name unknown), Stella McCartney’s L.I.L.Y, Viktor & Rolf’s Spicebomb or the new fragrance of Courrèges (also name unknown).