It is actually one of my favourite songs from Sting. ‘An Englishman in New York’ can be interpreted in many ways, and I was very much inspired by the way UK brand Ben Sherman translated the theme in their A/W ’12 campaign, in collaboration with Dazed & Confused. They presented the collection in Amsterdam yesterday, and I had a little chat with Mark Maidment, Creative Director of the brand. Read the interview after the jump >>>

TD:How did you come up with the idea of ‘An Englishman in New York’?
MM: I met Russell (the owner of the barbershop Tommy Gunns -TD) at the Lower East Side on a hot summers day, and instantly noticed his unique look. He mixes historic elements, British style (authentic waistcoats and well made shoes) with modernity (he has tattoos, loves modern art), and he runs his salon succesfully -it’s always busy down there. So I thought he was a fantastic British export. I asked Russell if he knew more succesful British guys with interesting jobs. The goal was not if they were goodlooking, but if they were doing something that is not that mainstream.
We brought all the guys together for a 2 days shoot in New York, and it resulted in the A/W ’12 campaign.

TD: You have two men featuring in the campaign with amazing mustaches. Was it a coincidence?
MM: It wasn’t premeditated! Simon (who also modelled for the lookbook-TD) has a moustache over a beard, and his moustache is different from Russell’s. Beards (and moustaches) are a trend at the moment, and it blended very well with the image of the campaign, so why not make use of it?

TD: Apart from living in New York and wearing Ben Sherman, what else is typical about these men to be the faces of the campaign?
MM: We didn’t force the brand upon them, but we showed them the collection, asked them to choose what they liked, and wear it in the mix with their own clothes. That’s what makes it look authentic and real. Like they are themselves. They have interesting jobs -from restaurant owner to photographer- and they are succesful. They live the American dream, but stay true to their roots. Like Simon says: “It’s easier to be English in New York than in the UK.”
(Maybe that’s what Sting meant in his song: “I’m an alien, I’m a legal alien, I’m an Englishman in New York. Be yourself, no matter what they say.” -TD)

TD: Can you already give us an insight on what we can expect from the S/S ’12 campaign?
MM: We’re expanding the concept of an Englishman in New York to Miami. It will have a different edge, and it is not so much about the setting but about the people and the product. I have seen so many amazing people there -musicians, artist, creatives- with their own style in these subcultural places. It is going to be exciting.

TD: The brand has a strong relation with music -bands are wearing Ben Sherman, the plectrum is an important trademark-, is there a band or a musician you would like to see wearing Ben Sherman?
MM: I cannot really name one…Professor Greene (British rapper/performer- TD) and other musicians that are specific to the brand. I’d like to see more rap -and Hip Hop artists wearing Ben Sherman because of the great contrast it makes. We dressed Mos Def 6 months ago in a well-cut 60’s style suit, and that looked very good. 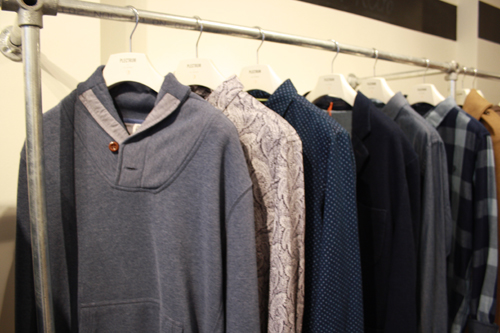