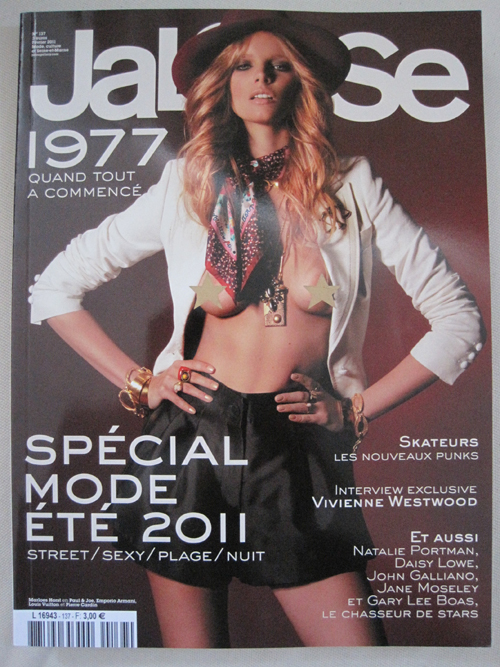 It was also my (Digitalista K) birthyear. Yes, I’m an oldie. But I can at least say I’ve seen fashion evolving through three decades already. French magazine Jalouse brought an hommage to the year of 1977 in their February issue. Ofcourse I could not leave the bookstore without this collector’s item, and share some of my thoughts with you….

The year of 1977 was obviously a turningpoint in fashion and culture. I never realized that my birthyear was that significant in history. But now it makes sense why I sing ‘Hotel California’ from the Eagles out loud every time I hear it, why for a long time I wished I was a Charlie’s Angel, and why I have an Apple computer (the first Apple computer was released in 1977). 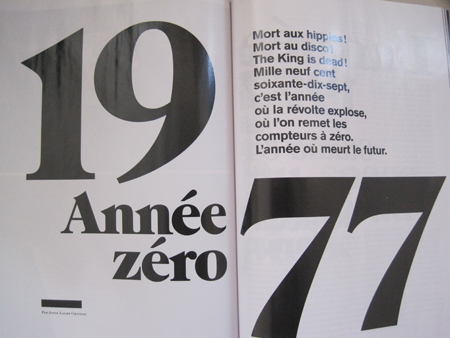 It was also the year that classic rock fell of its throne (The King had left the building…) and disco music made its entry. Studio 54 opened its doors on April 26th, and its visitors were immortalized in Andy Warhol’s book Unexposed Exposures. NOTE: We saw a revival of the Studio 54 look in the S/S ’11 collection of Marc Jacobs, and Gucci latest catwalkshow for F/W ’11: bright colours, fluid chiffon dresses, high waisted flare trousers, maxi sunglasses, wedges or chunky platforms.

Yet, there’s always need for some rebellion. Which came in the shape of punkband the Sex Pistols (Never mind the Bollocks), and mighty ol’ Viv Westwood. And a whole lot more came down that year ‘politically’. An oil crisis, hijacks and stuff, but we’d rather focus on the positive side of things. Frankly, I can actually say I’m quite proud to be born in 1977.

I’m not the type of girl to wear a tattoo, but this one underneath could just change my mind…

Tags from the story
1977, culture, fashion, INSPIRATION, Trends
0
Facebook Twitter Pinterest
Google + LinkedIn Email
Written By
The Digitalistas
More from The Digitalistas
This is the perfect kind of jumper for this season.
Read More