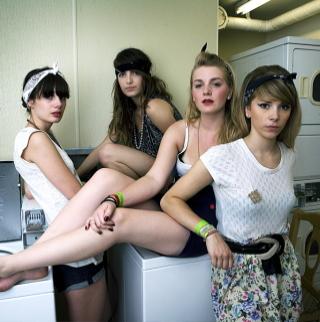 Who they are? Four very young French girls (their average age is twenty) with no career plan, just a good D.I.Y. rock ‘n roll story that reminds one of the glorious years of punk music. Their bio could read something like this: “The Plastiscines met in high school. They play rock music, and they obviously drink beer—while remaining pretty.” The New York Times recently called them “one of the best thing that has happened to rock ‘n roll in the last ten years.” so they must be really good!

Le Freak de Fashion
Last season, the fashion world fell completely in love with this French pop-group and they preformed during fashion week. Now they will also perform live during the very important debut for Jenny Humphrey in a new episode of Gossip Girl! People in America can see this show on Monday. All the fans in Europe have to wait a few more months. But we know for sure the show will pop up on the world wide web!

Do you want to see more of the Plasticines? Check their myspace profile immediately! We hope they will visit Amsterdam very soon!

Tags from the story
French Pop-group, gossip girl, Music, Platicines
4
Facebook Twitter Pinterest
Google + LinkedIn Email
Written By
The Digitalistas
More from The Digitalistas
Not a girl this time, but a boy is giving you heads...
Read More

Summer, where are thou? While the rain is ticking