The Digitalistas talked with Garance Doré 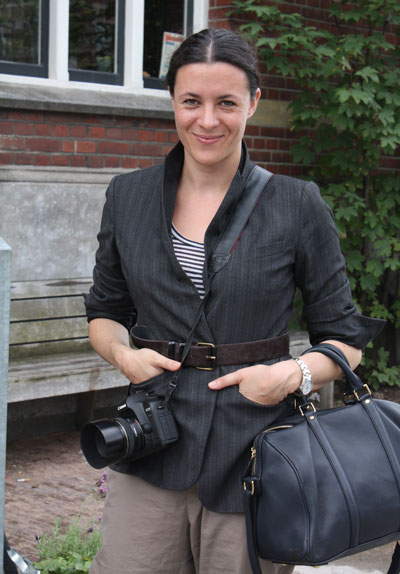 Being half-French and speaking it fluently sometimes help . Well, for one, I could interview Garance Doré in her native language. It helps to create a special connection. I guess that’s why she wanted our bag so badly. A little hint of chauvinism? No actually, it’s because we like Garance and we are honoured she wanted one of our bags.

Now we hope it will never leave her side, that she will convince Scott-the Sartorialist-Shumann, her sweeatheart, to carry it along too. When we ran into her the day after I had my (mini)interview with her, she told us that she would go to the Hamptons to enjoy a little holiday. Imagine who could also be at the Hamptons at the same time? Sarah-Jessica Parker? Anna Wintour? Michelle Obama??? I think we should have someone in the States check every magazine or newspaper to see our bag pop-up at some point….

Enough nonsense. THE INTERVIEW… Which wasn’t more than three questions, since we didn’t want to bother her with book-size list of questions, but let her enjoy her short stay in the wonderful city of amsterdam.  Garance is also short and clear in her answers. A little summary:

-She likes the ease of the Dutch women in their relation to fashion: ‘ Riding a bike 90% of the time doesn’t allow you to wear anything complicated. It’s a fresh change from the fashion aesthetics in Paris for instance.’

-The wearability of the Dutch designs is also something she was pleasantly surprised with, but still, a Belgian student was her favourite and the winner of the contest she juried on during Amsterdam Fashion Week.

-When I asked her:  Do you think that the influence online media has on fashion will grow even more for the coming years?     She replied: ‘Definitely! It’s almost like a purpose. Online media is far beyond the ignorance-fase. The fashion business is finally realizing that, and will do even more for the years to come.’